Spooky Boscawen-Un Stone Circle in Cornwall, England. Another great place to visit at 3am on a foggy night. 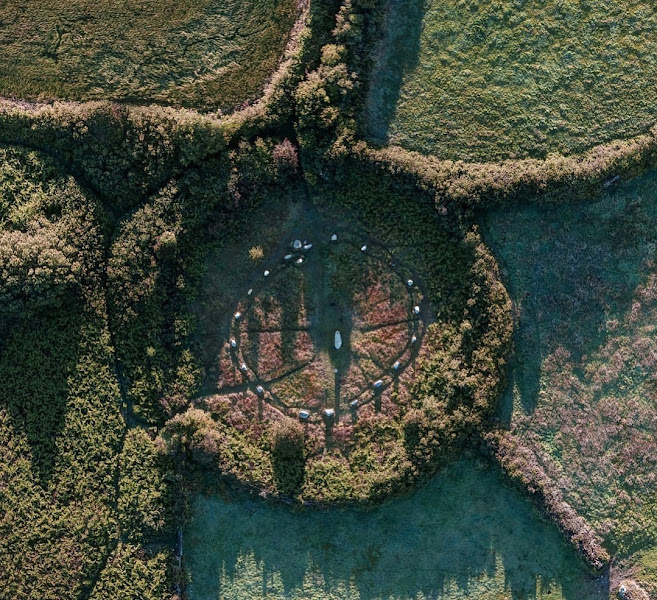 The stone circle consists of a central standing stone encircled by 19 other stones, including 18 made of grey granite and one of bright quartz, which describe an ellipse with axes of 24.9 m and 21.9 m. The position of the quartz stone in the southwest may indicate the likely direction of the sun as it moves south after Samhain. At the northeastern edge of the stone circle are two stones in the ground which it is possible had at one time been a burial cist. The large central stone has a feet or axe petroglyph. These engravings are unusual in the United Kingdom, though they can also be observed on some of the stones at Stonehenge.

The fact that the circle, like others in West Penwith, had 19 stones may also relate to the 18.64 year cycle of the moon, or the 19 year metonic cycle of the moon and sun. Also, the center stone faces in the direction of the midsummer solstice sunrise, towards an outlying standing stone, and the rising sun at midsummer illuminates a carving of two axe-heads that lie towards the base of the stone. Axes were important to the Neolithic and Bronze-Age peoples as ritual objects, and Cornish greenstone axes were traded with other tribes in England and elsewhere, so this carving on the center stone is probably a sacred symbol.