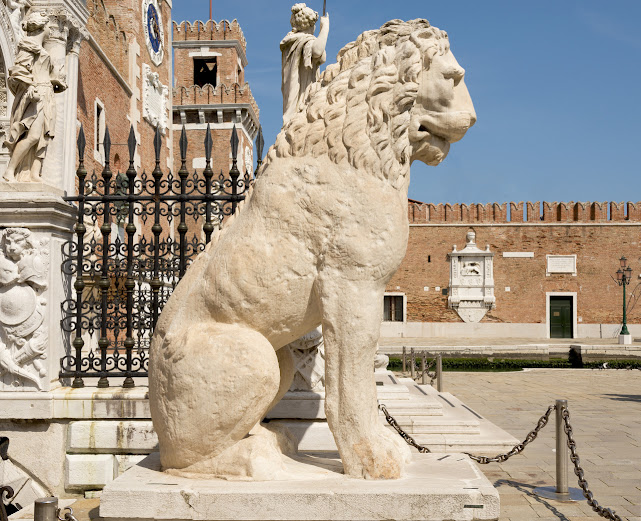 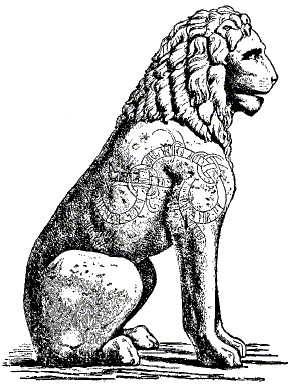 The Piraeus Lion was originally sculpted in about 360 BC, and became a famous landmark in Piraeus, Athens, having stood there since the 1st or 2nd century AD. It was looted by Venetian naval commander  Francesco Morosini in 1687 as plunder taken in the Great Turkish War against the Ottoman Empire, and now stands in front of the Arsenal in Venice, Italy.

It is depicted in a sitting pose, with a hollow throat and the mark of a pipe (now lost) running down its back; this suggests that it was originally used as a fountain. This is confirmed by later accounts which say water flowed from its mouth into a cistern at its feet.

The statue, which is made of white marble and stands some 3 m (9 ft.) high, is particularly noteworthy for having been defaced some time in the second half of the 11th century by Scandinavians who carved two lengthy runic inscriptions into the shoulders and flanks of the lion.

In the 19th century the scholar Carl Christian Rafn translated the barely legible runic inscriptions, much of which had to be reconstructed. Rafn’s attempt is as follows.

Right side of the lion:

“Asmund cut these runes with Asgeir and Thorleif, Thord and Ivar, at the request of Harold the Tall, though the Greeks considered about and forbade it.”

Left side of the lion:

“Hakon with Ulf and Asmund and Örn conquered this port. These men and Harold Hafi imposed a heavy fine on account of the revolt of the Greek people. Dalk is detained captive in far lands. Egil is gone on an expedition with Ragnar into Romania and Armenia.”