Marble sarcophagus of Grand Prince of Rus Yaroslav the Wise and his wife Queen Ingegerd Olofsdotter of Sweden, 1054 AD 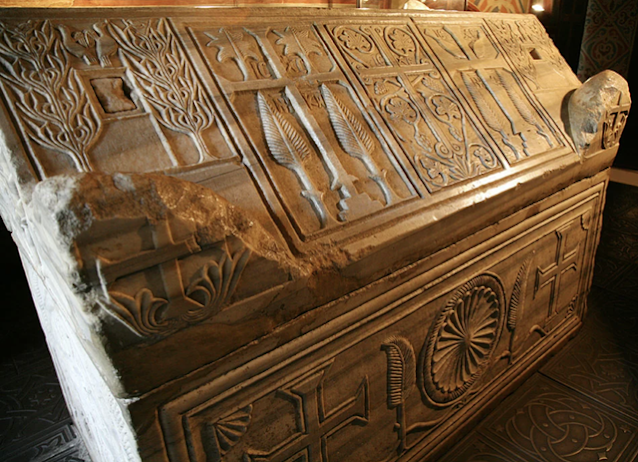 This king basically stole the bride of Norwegian king Olaf the Saint, the Swedish princess Ingegerd. (if I am not mistaken she was also placed in this sarcoohagus).

A daughter of Yaroslav and Ingegerd married Harald Hardrada (but to earn that right, Harald had to spend years in Byzantine Empire accumulating wealth.

Harald Hard Ruler invaded England in force in 1066, mere months before William the future Conqueror did, requiring Harold Godwinson of England to march up to York and successfully fight and defeat him at Stamford Bridge. This probably led to the Norman victory later in the south, when William was able to overcome Harald's tired and not yet fully re-formed army at Hastings.

The sarcophagus is at St. Sophia Cathedral in Kyiv. It is of marble and weighs 6 tons.