The Mörkö gun is an early Swedish firearm discovered by a fisherman in the Baltic Sea at the coast of Södermansland near Nynäs in 1828. It has been given a date of ca. 1390. 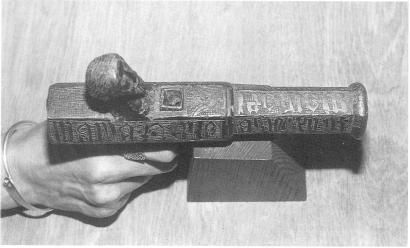 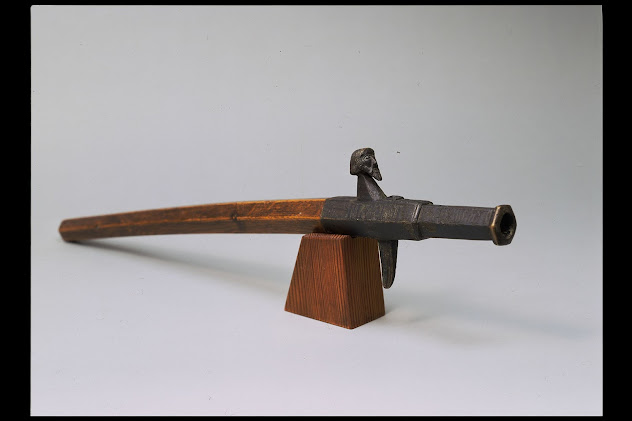 The gun was excavated from the Baltic Sea near Nynäs, on the coast of Södermansland, by a fishing boat before 1828. After being in a couple of private collections, it finally found its home in the Swedish Royal Collections. It measures 19.3 cm overall, with a steady caliber of 21 mm smoothbore, weight 945 g, of hexagonal shape, which is characteristic of guns around or shortly after 1400, and the rear socket for the tiller stock is 6.9 cm long. As the first hooks on barrels do not seem to have appeared before ca. 1430, this feature gives a good reason for attributing this small gun (German Faustrohr) to about that date.Depicting a bearded face in high relief is quite usual for artisans of the High Gothic period around 1400 and is also found e.g. on contemporary stoneware  It certainly has nothing to do with the portrait of Jesus Christ but simply reflects the taste of fashion of that period and, of course, has an apotropaic (warding off disaster) function in those superstitious times as well.This head of course blocks the sight when the gun is aimed but on the other hand acts as a fire guard.The Gothic minuscule script mentions the word maria several times; the rest is, as I said, illegible and mere decoration. This religious invocation of Holy Mary is sometimes found on helmets and swords.