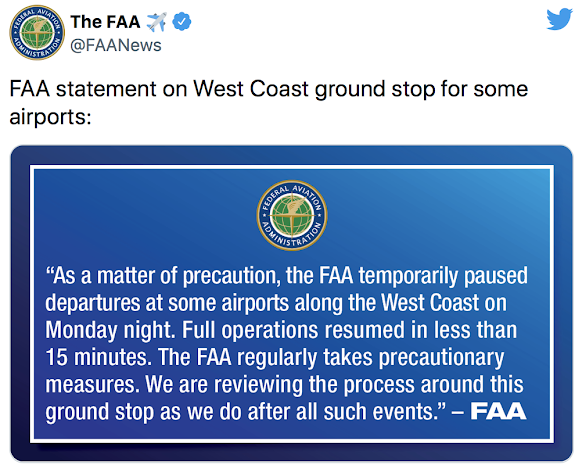 We now find out that the messaging to air traffic control personnel at the time of the order stated NORAD advised of a missile-launched aerial maneuvering vehicle from North Korea impacting airspace from the Aleutian Islands to Los Angeles. A ground stop was subsequently issued for air traffic control centers ZAN (Anchorage), ZSE (Seattle), ZOA (Oakland), and ZLA (Los Angeles) —and possibly others — no later than 2:32 PM PST. In fact, ZLA may have received the order a few minutes earlier.

Just 16 minutes later, NORAD advised that the ballistic missile's aerial maneuvering vehicle payload had splashed down in waters far to the east of Japan and that normal operation could proceed, effectively ending the ground stop. In reality, the vehicle actually splashed down in the waters to the west of Japan.

In addition, minutes before the initial ground stop order and the details surrounding it being communicated to some air traffic controllers, NORAD notified the FAA to have Los Angeles Air Traffic Control Center clear the airspace around the northern stretch of Vandenberg Space Force Base, which is located about 170 miles northwest of Los Angeles. We assume this was meant to ready the area for a potential launch of a Ground-Based Midcourse Defense (GMD) interceptor capable of knocking down ICBMs. While the vast majority of GMDs are based in Alaska, a handful are based at Vandenberg for limited operational contingency and test duties.

This whole ordeal gave us a unique glimpse into what would happen if the U.S. came under attack by some sort of long-range ballistic missile capability. It seems that the first indicator we may get that such an event was occurring would be the FAA ordering a ground stop to aircraft located over a broad area and the clearing of critical airspace so that interceptors can be safely employed.

Check out the full story here.