Here we see the smartest woman in the world ( after Elizabeth Warren, of course) presenting Sergei Lavrov, the wily Russian Foreign Minister, with a reset/recharge button, symbolizing a new era in US/Russian relations.  This diplomacy is so incandescently smart that Hillary! misspelled the word "reset" in Russian as "recharge," which Sergei immediately pointed out.  I guess the second smartest woman in the world couldn't find a competent Russian translator in all the halls of the State Department. 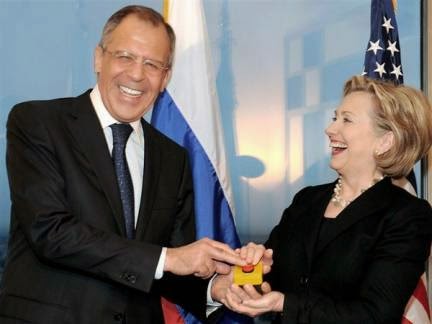 Nowadays, consistent with this early display of childish amateurism, Smart Diplomacy has collapsed into complete ruin.  Relations with the Russians are the worst they have ever been post USSR, and we see this written on a prop in a parade in Russia.  Certainly, the authorities had to approve of such a public message to the Americans.

"To be personally delivered to Obama." 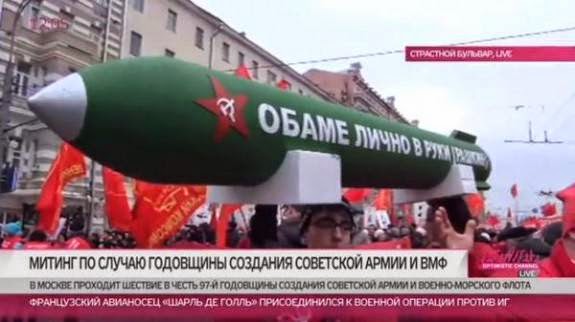 If that isn't an expression of contempt and hatred, I don't know what would be, other than a sharp punch in the nose.

Smart diplomacy indeed!  What complete clowns we have as our rulers.