This is most likely where Obama is getting his orders from. 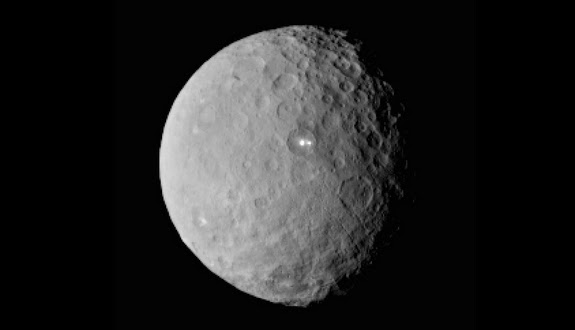 The new photos of Ceres from NASA's Dawn spacecraft, which is scheduled to arrive in orbit around Ceres on the night of March 5, reveal that a puzzling bright spot on the dwarf planet's surface has a buddy of sorts.
"Ceres' bright spot can now be seen to have a companion of lesser brightness, but apparently in the same basin," Dawn principal investigator Chris Russell, of UCLA, said in a statement. "This may be pointing to a volcanolike origin of the spots, but we will have to wait for better

resolution before we can make such geologic interpretations."

Dawn will begin investigating the many mysteries of Ceres — the largest body in the main asteroid belt between Mars and Jupiter — in earnest soon enough. After reaching Ceres' orbit next week, the probe will spend about six weeks working down to its first science orbit, getting there on April 23.