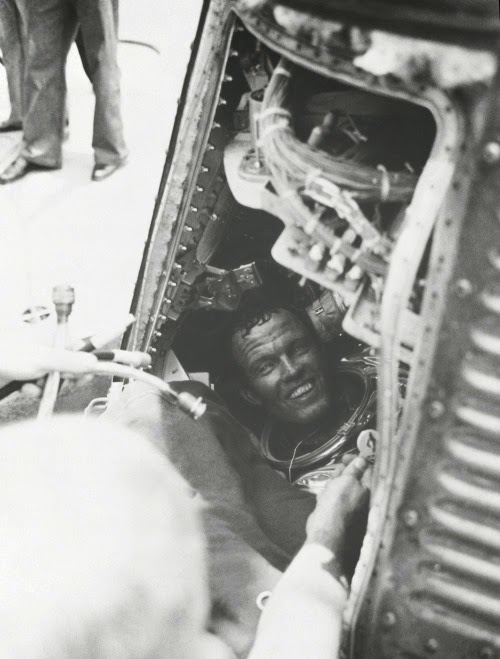 Astronaut L. Gordon Cooper Jr., has a smile for the recovery crew of the U.S.S. Kearsarge, after he is on board from a successful 22 orbit mission of the Earth in his Mercury spacecraft “Faith 7.” Cooper is still sitting in his capsule, with his helmet off.

Toward the end of the Faith 7 flight there were mission-threatening technical problems. During the 19th orbit, the capsule had a power failure. Carbon dioxide levels began rising, and the cabin temperature jumped to over 100 degrees Fahrenheit (38°C). Cooper fell back on his understanding of star patterns, took manual control of the tiny capsule and successfully estimated the correct pitch for re-entry into the atmosphere. Some precision was needed in the calculation, since if the capsule came in too steep, g-forces would be too large, and if its trajectory were too shallow, it would shoot out of the atmosphere again, back into space. Cooper drew lines on the capsule window to help him check his orientation before firing the re-entry rockets. "So I used my wrist watch for time," he later recalled, "my eyeballs out the window for attitude. Then I fired my retrorockets at the right time and landed right by the carrier." Cooper's cool-headed performance and piloting skills led to a basic rethinking of design philosophy for later space missions.

Gordo looks happy to be alive and in one piece.