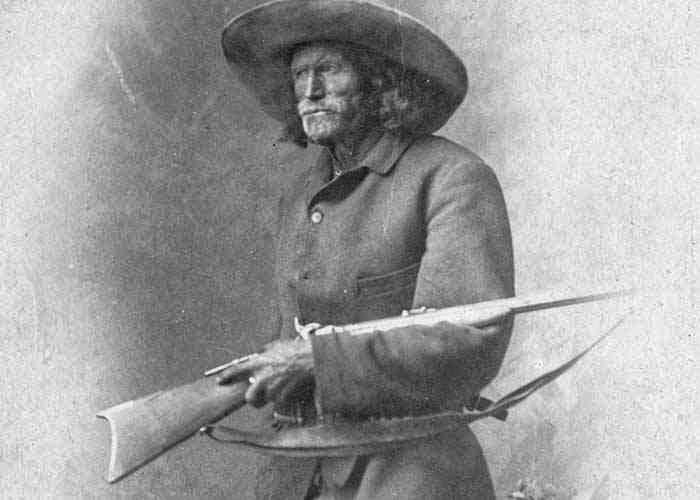 Jim Baker - 1879
With “his warmest friend and constant companion,” a Sharps buffalo rifle.
Some anecdotes from a well lived life:


On Aug. 21, 1841, Baker and another man were hunting across the river from Fraeb’s camp. When they saw the ominous sign of a rising cloud of dust in the mountains, they rushed to the camp. They soon became engaged in a fierce fight with Sioux, Cheyenne and Arapaho.
Fraeb was one of the first killed. Baker is credited with taking charge after that. During the two-day fracas, four trappers and most of the trappers’ horses were killed. Some estimates claim as many as 100 Indians were killed, but historian William F. Stocks states the number is in fact unknown. According to Stocks, more than 100 horses from both sides were indeed killed.
On August 27, Baker returned to Bridger’s camp with the other survivors. The now-defunct town of Battle in the Sierra Madres west of Encampment, Wyo., gained its name from the conflict, as did Battle Creek, nearby Battle Pass and the Battle Highway.
On another occasion, Baker, who had camped with the Shoshone near what is now Medicine Bow, Wyoming, rescued the daughter of a Shoshone chief when she was kidnapped by a Blackfeet band and returned her to her father. Baker married the young woman in October 1847. The bride presented her buckskin-clad groom with a necklace made of bear claws—an emblem of bravery.

In 1858, Baker owned and operated a ferry on the Overland Trail crossing of the Green River. In the Denver newspaper interview years later, he recalled that he charged $10 per wagon for the service. Historian Charles Leckenby related in his book, Tread of the Pioneers, that when a competitor moved in nearby, the men attempted to settle their differences by each swallowing a shot of whiskey before taking rifle shots at each other. Leckenby states that Jim Bridger intervened to put an end to this foolishness.

In 1873, he built a two-storey cabin of hand-hewn logs near present-day Savery, in the Little Snake River Valley of southern Wyoming near the Colorado line. The cabin resembled a fort, and for many years, a railing surrounded the second story. Baker raised cattle, using the JB brand.
A Cheyenne Daily Leader report of Jan. 17, 1877, described the nearly 60-year-old Baker as “a frontier character” who was as “gnarled and grizzled as one of the many old pines that have graced the mountain peaks.” His rustic appearance was likely the result of fights with bears as well as men.
Baker died on May 15, 1898, in his cabin. He was buried in the family cemetery at the base of the mountain that bears his name. According to author Leighton Baker (no relation), Jim Baker fathered 14 children by three wives, which was probably his most impressive accomplishment.  On the other hand, if you save a woman from the ministrations of the Blackfeet, she ought to be properly grateful!
Posted by c w swanson at 10:00 AM