The Egyptians impart a public groin kick to Monsieur Kerry

I guess now we know who the real sissy is. 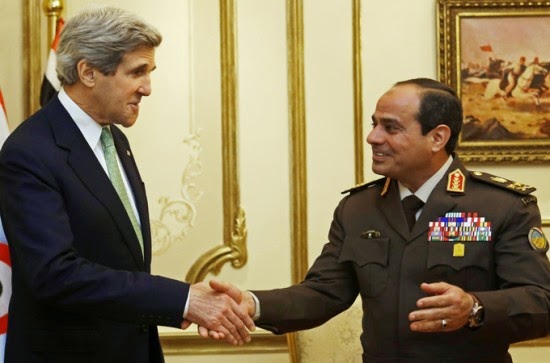 Via The Guardian, with a hat tip to Weasel Zippers:

Egypt’s military-dominated government has delivered a humiliating, public slap in the face to John Kerry, the US secretary of state, by sentencing three al-Jazeera journalists to long prison terms only hours after Kerry personally expressed his deep concern about the case in high-level meetings in Cairo. The snub represents a disastrous beginning to Kerry’s already fraught Middle East tour, which took him to Baghdad on Monday for crisis talks about the Islamist extremist uprising.

Kerry must now be asking himself whether it was entirely sensible to offer such diplomatic, financial and military support to Sisi unconditionally before their meeting and before the court announced its verdict. This is not the way hard-headed, worldly-wise American secretaries of state, such as Henry Kissinger, George Shultz and James Baker, would have gone about it. All old Middle East hands, they would surely have driven a tougher bargain. On the other hand, they would all probably have placed America's and Israel's strategic interest in a strong, stable pro-western Egypt above human rights issues.
Posted by c w swanson at 11:30 AM