The kind of nutty idea I like - the Fire Hedgehog! 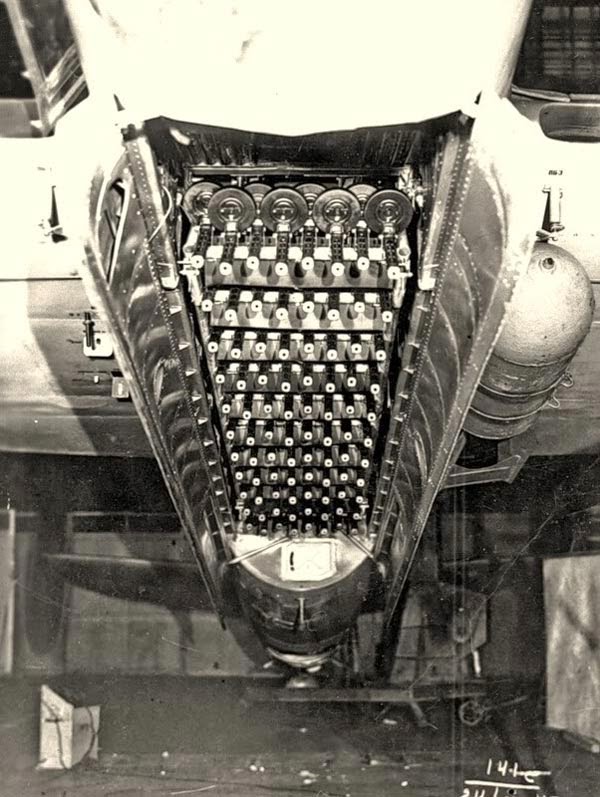 The iconic Soviet PPSh-41 submachine gun was quite useful.     But In 1944 Soviet engineers came up with a new use for the PPSh which was perhaps the craziest invention in military aviation history. Called the “Fire Hedgehog”, the weapons consisted of a banks of 88 PPSh-41 submachine guns mounted on a rack within the bomb bay of a Tupolev Tu-2 bomber.  The point of the weapon was to strafe the enemy with a massive volley of 7.62 projectiles.
While impressive and deadly looking, the Fire Hedgehog may have had much in the way of firepower, but was severely lacking in practicality.  Each PPSh-41 was fed by a 71 round drum magazine, altogether a total capacity of 6,248 rounds, all of which would have needed to be loaded by hand.  As a result, around 100 man hours were needed to load and prep the Fire Hedgehog.  While one would think that the masses of submachineguns would spray lead over a large area, in reality the stream of bullets tended to land over a very narrow area.  It was often very difficult for pilots to line up their bomber properly, and when engaged the Fire Hedgehog only provided a few seconds worth of fire.  Most importantly the range of the PPSh was very limited, especially compared to aircraft mounted machine guns.  Thus the bombers had to fly extremely low for the weapon to be effective, dangerously exposing itself to enemy anti-aircraft fire.
As a result of its shortcomings, the Fire Hedgehog never made it beyond the testing stages, and was never used in combat.