Netanyahu has the expression you get when you have to pick up wet dog turds your mutt left on the neighbor's lawn. 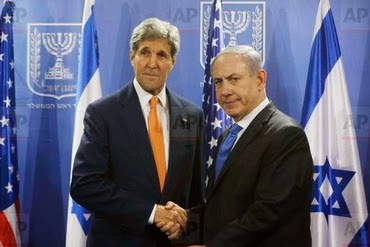 
"With regard to what's happening in Gaza, the US president has no relationships with anybody in the region who matters. To define American "allies" as broadly as possible, name one who has any reason to trust Obama or his emissaries. In Cairo, General Sisi regards Obama as a Muslim Brotherhood sympathizer; in Riyadh, King Abdullah regards him as the enabler of the Shia Persian nuclear program; and in Amman, the other King Abdullah regards him as the feckless bungler who's left the Jordanians with the world's wealthest terrorist group on their eastern border.
Shuttle diplomacy, of the kind the vainglorious Kerry is attempting, only works if you already have a relationship. You can't start trying to build one after the shooting's started. And in this case the regional leaders' crude self-interest outweighs whatever value they might place on staying on the right side of President Fundraiser and Secretary Windsurfer. General Sisi wants to destroy the Brotherhood in Egypt, to which Hamas has significant ties. The Saudis are Israel's new best friend and see them as their last chance to scuttle Iran's nuclear ambitions. So we are in a bizarre situation where the Arab leaders are more hostile to Hamas than Washington is."

Someone simply needs to win.

It's worse than useless to have these periodic little wars with people who want nothing more than your total annihilation.  Sooner or later they might develop the means to actually do that, so what's the purpose of risking such a catastrophe? The Israelis need to expel Hamas and the PLO from their territories once and for all, killing as many as possible in the process. Sure, the bleating weanies will wail about it, but the IDF currently takes incredible care to minimize civilian damage, yet they are still tarred internationally as monsters.   Oddly, they will likely never have the support of the Egyptians, the Jordanians and the Saudis as strongly as they have it now, so they might as well solve the problem and be done with it.
Posted by c w swanson at 5:45 PM