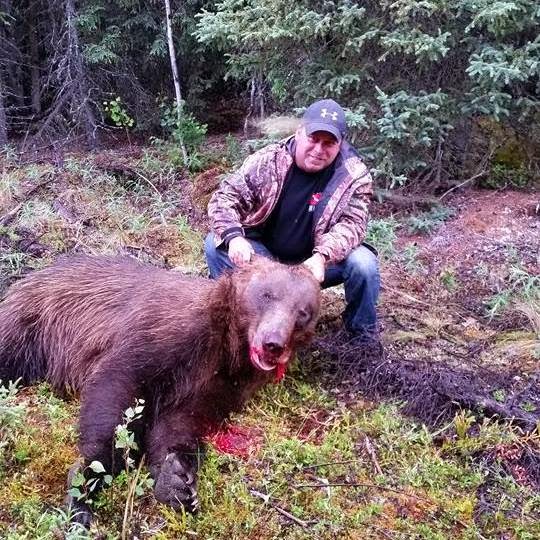 “There was some loud banging on one of my windows in the first level and pounding on my walls which shook the whole house,” Landess wrote in an email. “My son was sleeping downstairs and stood up to be eye-level with a 9-foot brown bear looking at him through the dining room window.”
Landess said he looked outside his upstairs window and saw the bear peeking over the bed of his pickup. He yelled at the bear and his dog barked, which caused the bear to run into the woods.
Landess told his son to keep an eye on the bear so he could grab a gun from his truck. While he went outside to get a gun, the bear circled around to the end of his driveway and started to walk back toward him.
Both Landess and his son shot a couple rounds and the bear scattered back into the woods.
“We went back inside assuming this was just a routine of scaring off another bear, as we do almost every summer,” he said.
After going back to bed, Landess received an early morning wake-up call from the bear. At about 6 a.m. he heard more banging in front of the house as the bear attempted to get inside.
“I couldn’t believe that it came back,” he said.
Landess grabbed his .45 pistol, stepped out onto his upper deck, took aim and fired seven rounds toward the bear’s vitals. He said the bear “got crazy” and ran about 50 feet before it collapsed and died.
Posted by c w swanson at 8:39 PM