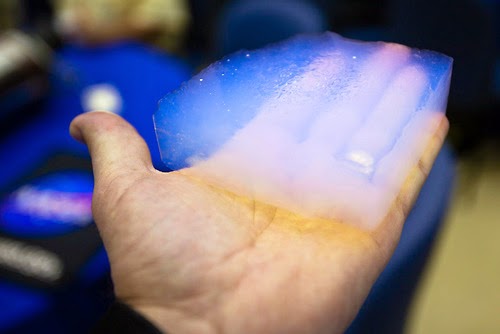 Translucent, ethereal blue and over 96% air, aerogels are the lightest solids in the world. They’re not
actually frozen smoke—they’re an artificial material—but the nickname fits. They owe their creation to
a bet between two chemists, Charles Learned and Samuel Stephens Kistler, in 1931: they wanted to see
if they could take a gel and replace its constituent liquid with gas, without causing shrinkage. Kistler
won.
Though aerogels have been improved upon in the years since, his original premise is the same: a
polymer is combined with a solvent to form a gel, then the liquid is extracted from it and replaced with
air, hence creating aerogel. The crucial part is that the aerogel must maintain the gel’s structure, so
they’re solid to the touch and don’t disintegrate.
Aerogels are actually pretty remarkable—they’re the world’s best insulators, being extremely porous
but low in density; they can withstand explosive damager; and they can support several thousand times
their weight. Silica-based aerogels are quite fragile, but newer polymer-based ones are extremely strong
and flexible.