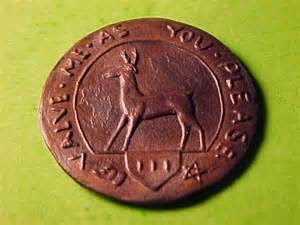 What could be more the mark of the rugged individual than to mine and then mint your own money?

Samuel Higley of Connecticut was one such man back in the rough and ready 1700's in New England.  Owning his own copper mine located on his property, he mined his own copper, and used it to mint his own version of money.

First, his production of coin in 1737 were self valued at three pence, even though there was no where near that much value in the copper in his coin.  Apparently, it was the price of an ale at the local roadhouses, and thus a convenient value for a thirsty Mr. Higley.

However, complaint naturally and quickly arose about the clear difference between the face value and the actual copper value, so Higley obligingly changed the coins to read "Value me as you please," as in the example above. Someone figured that three pence was about ten times the value of the copper in the coin, which would give Higley a profit per coin of 465%!  No wonder folk grumbled!

These are rare today supposedly because they were highly valued by goldsmiths for use in alloying with gold, due to the quality of Mr. Higley's copper.  Most were melted down and reused.

Can't help but admire a man who mined his own copper, melted and minted it into coin, and then used it to purchase his ale!