A group of 53 Roman gold coins have been discovered on the seabed off the coast of Xàbia in Alicante, southeastern Spain. They are gold solidi ranging in date from the late 4th to the early 5th century, and are in such excellent condition that all the coins but one could be identified. There are three solidi from the reign of Emperor Valentinian I, seven from  Valentinian II, 15 from Theodosius I, 17 from Arcadius and 10 from Honorius. 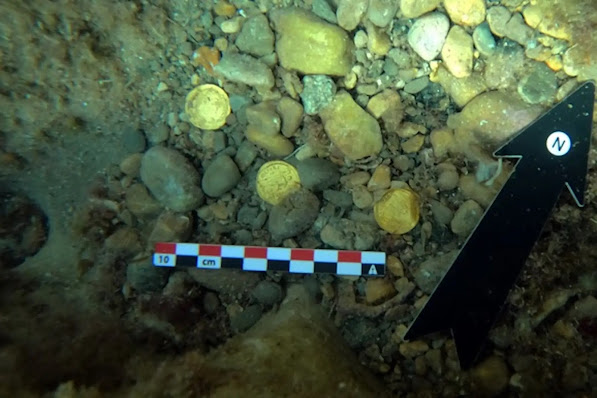 Gold has its own "look" in the water.  Once you see it, you'll always recognize it.

The coins were discovered on the sea bottom next to Portitxol island, a popular destination for sport divers because of the rich marine life that inhabits its seaweed meadows of its rocky bed. Even so, it managed to hide dozens of Roman gold coins for 1,500 years until freedivers Luis Lens and César Gimeno spotted eight flashes of light on the seafloor. At first they thought they were modern ten cent pieces, or maybe mother-of-pearl shells gleaming in the water. They picked up two of them.

When they returned to the boat, they saw that they were ancient gold coins bearing identical profiles of a Roman emperor. They immediately alerted city officials to their discovery and led marine archaeologists to the find site.