I've had mine flying for so long in the hot Redding summer that it needs replacing. This looks like the candidate. 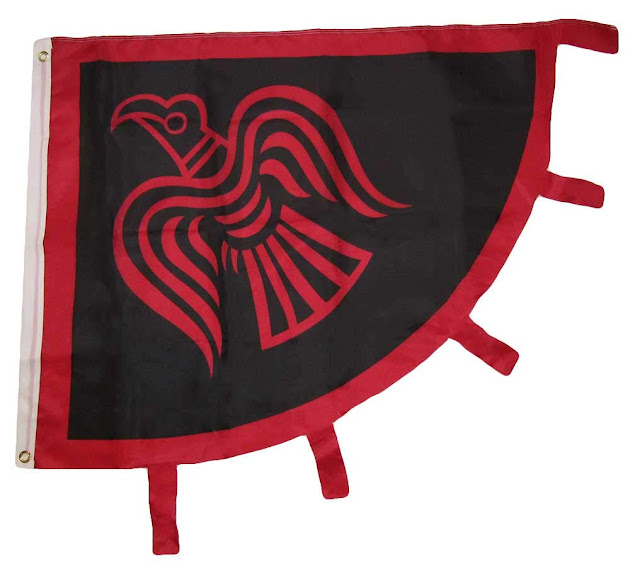 The Raven's Standard.
The back story:

The raven banner was used by a number of Viking warlords regarded in Norse tradition as the sons of Ragnar Lodbrok. The first mention of a Viking force carrying a raven banner is in the Anglo-Saxon Chronicle. For the year 878, the Chronicle relates:

In the winter of the same year, the brother of Ivar and Halfdan landed in Devonshire, Wessex, with 23 ships, and he was killed there along with 800 other people and 40 of his soldiers. The war banner (guþfana) which they called "Raven" was also taken.

The 12th-century Annals of St Neots claims that a raven banner was present with the Great Heathen Army and adds insight into its seiðr- (witchcraft-) influenced creation and totemic and oracular nature:

Geffrei Gaimar's Estorie des Engles (written around 1140) mentions the Hrafnsmerki being borne by the army of Ubbe at the Battle of Cynwit (878): "[t]he Raven was Ubbe's banner (gumfanun). He was the brother of Iware; he was buried by the vikings in a very big mound in Devonshire, called Ubbelawe."