Pro Russian gunmen seize control of government buildings in the Crimean region of the Ukraine. 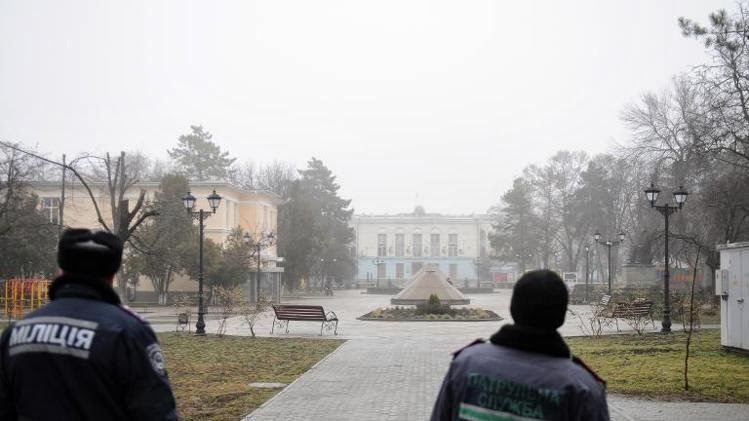 By the way, that says "militia" on the back of the guy on the left.   But whose "militia?"

"The Russian flag flew Thursday morning over both the Crimean parliament and government buildings in the regional capital of Simferopol.
The Black Sea autonomous region's prime minister Anatoliy Mohilyov confirmed to AFP that up to 50 men with weapons seized the buildings and were preventing government workers from entering them early on Thursday."
Via the Belmont Club:
"The BBC says Russian forces on Ukraine’s border are on high alert. “Russia has put 150,000 combat troops on high alert near its border with Ukraine. The Russian defence Ministry says it is taking measures to guarantee the safety of the Black Sea Fleet, which is based in Crimea.”
For legal cover the former president of the Ukraine has asked for Russian protection. “Ukrainian President Viktor Yanukovych has released a statement saying he still considers himself president of Ukraine and asking the Russian authorities for protection.”
Ukraine’s acting interior minister has put internal security forces on high alert after reports that Russian proxies had seized buildings in the Crimea.
Meanwhile, according to Reuters Ukraine said “it would regard any movements by Russian military in Crimea outside the Russian Black Sea fleet’s base in Sevastopol as an act of aggression. Acting President Oleksander Turchinov issued the warning in the national parliament after armed men seized the regional government and parliament buildings in Crimea, where some ethnic Russians want the region to join the Russian Federation.”
...


"So far this crisis has been characterized by mutual miscalculation. If the West did not anticipate that the previous Ukranian government would renege on the EU deal neither did Putin appear to recognize the power of the opposition.  Both sides have blundered into this confrontation. The wild card are the Ukranians who will now be pressed to deal, but who may not deal. Another source of uncertainty is the effect of national pride, which so absent in the West, is yet a potent factor in Russia.  The last source of uncertainty is Western leadership. It seems fair to say there are differences between the EU leadership and Washington.
Ordinarily those fractures might not be vitally important. But as president Obama contemplates the ruins of his “reset” policy all the defects of his leadership are magnified in this crisis. Things really matter now; the time for “fast and loose” is over."
Indeed, that proverbial 3am phone call is coming again.  Will Obama and his administration even answer it?  Perhaps you could ask Ambassador Stevens.