Ok, the real thing this time

For entertainment, I rummaged through some old picture albums from, I dunno, the early 80's and late 70's. The oldest daughter apparently has never seen these, and copied some of them on her ipad and combined my old photos with some recent ones, to compare and contrast the old with the new.

I think this can be summarized as "the more things change, the more they stay the same."

And, I also think we can put to rest the rumors that the boy is the milkman's kid. 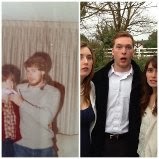 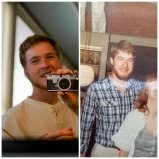