New developments in the Ukraine.

Things are seriously heating up in central Europe.

"If what The Interpreter’s hearing is true, Yanukovych has left Kiev for the city of Kharkiv. Maybe that’s because he’s lost control of the capital or maybe, as the State Department claims, he’s gone to Kharkiv to shore up support. Either way, though, there’s no scenario where the government simply abdicates and the opposition takes over. Russia won’t relinquish the country that easily. So either things are about to get even rougher in Kiev as Putin fills the power vacuum or Yanukovych is planning a new move."

Meanwhile, the Ukrainian government has voted to release the woman Yanukovych defeated in the last election from prison. 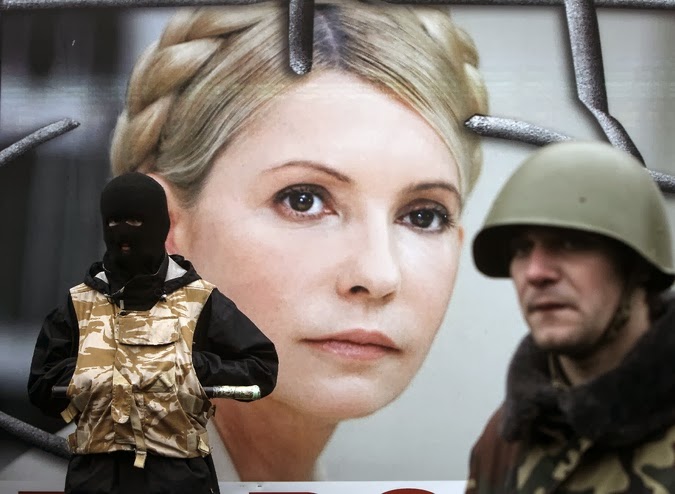 To understand the problem, one must know that in the west of the country, ethnic Ukrainians are predominant.  In the east, it's ethnic Russians.  The Crimea, on the Black Sea, is also heavily Russian and holds a vital naval base that the Russians will not allow to fall out of their control.  With their puppet Yanukovych at the helm, they don't worry, but with a truly independent Ukraine in control, they consider that a problem worth fighting over.

The Financial Times reports:
"Russia is prepared to fight a war over the Ukrainian territory of Crimea to protect the ethnic Russian population and its military base there, a senior government official has told the FT.
“If Ukraine breaks apart, it will trigger a war,” the official said. “They will lose Crimea first [because] we will go in and protect [it], just as we did in Georgia.” In August 2008, Russian troops invaded Georgia after the Georgian military launched a surprise attack on the separatist region of South Ossetia in an effort to establish its dominance over the republic…
However, many government officials say in private that Ukraine falls inside Russia’s sphere of influence. “We will not allow Europe and the US to take Ukraine from us. The states of the former Soviet Union, we are one family,” said a foreign policy official. “They think Russia is still as weak as in the early 1990s but we are not.”

So, the fitting end to the Sochi Olympics is a giant war in central Europe, in which the host country plays a primary role in starting a conflict.  Where is Obama in all this?  Nowhere, because he has squandered his credibility with all parties, but especially with Putin, who despises him.  The fruits of Obama's Syrian debacle are now evident.  His amateurish and naive behavior there leads to this new sort of conflict becoming all that much more probable.  With a strong, assertive America, as least there would be a hope of some moderation in the behavior of these people, but now, not so much.   Accurate or not, Putin likely believes he has a free hand in handling this crisis with the Ukraine however he wants, and it appears he is right.

If that is how it comes to pass, consider the encouragement that will give to every other tin pot tyrant.  What violence can we expect from such luminaries as Kim Jong Un, the Castros, The Chinese, or Maduro in Venezuela?

What if during some conflagration Obama manages to stumble the US into a hot war, ready or not?  How would you like to go to war with Red China?  Why shouldn't they challenge us now while we have a feckless naif in charge?  Something like that is probably the most immediate threat to our peace, there are multiple hair triggers ready to be pulled, and there are three long years left to endure of the narcissistic Nobel Laureate in charge of the most powerful country in the free world.

Hang on, and pass the ammunition.

This could be just the beginning of a very bloody three years.
Posted by c w swanson at 6:44 PM