They don't call them giant sequoias for nothing.

I can vouch for the fact that one really must see them in person to truly appreciate their size and mass. 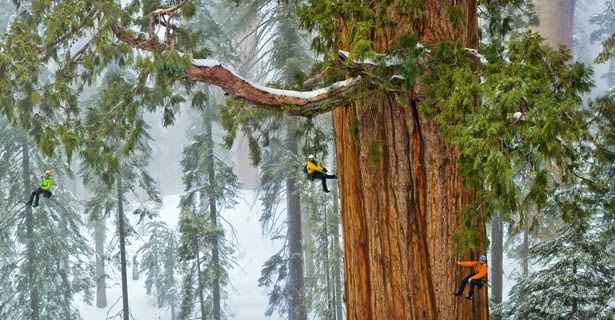 "On a gentle slope above a trail junction in Sequoia National Park, about 7,000 feet above sea level in the southern Sierra Nevada, looms a very big tree. Its trunk is rusty red, thickened with deep layers of furrowed bark, and 27 feet in diameter at the base. Its footprint would cover your dining room. Trying to glimpse its tippy top, or craning to see the shape of its crown, could give you a sore neck. That is, this tree is so big you can scarcely look at it all. It has a name, the President, bestowed about 90 years ago by admiring humans. It’s a giant sequoia, a member ofSequoiadendron giganteum, one of several surviving species of redwoods.
It’s not quite the largest tree on Earth. It’s the second largest. Recent research by scientist Steve Sillett of Humboldt State University and his colleagues has confirmed that the President ranks number two among all big trees that have ever been measured—and Sillett’s team has measured quite a few. It doesn’t stand so tall as the tallest of coast redwoods or of Eucalyptus regnans in Australia, but height isn’t everything; it’s far more massive than any coast redwood or eucalypt. Its dead spire, blasted by lightning, rises to 247 feet. Its four great limbs, each as big as a sizable tree, elbow outward from the trunk around halfway up, billowing into a thick crown like a mushroom cloud flattening against the sky. Although its trunk isn’t quite so bulky as that of the largest giant, the General Sherman, its crown is fuller than the Sherman’s. The President holds nearly two billion leaves.