Not really, I'm just being hysterical. I learned it from Al Gore. 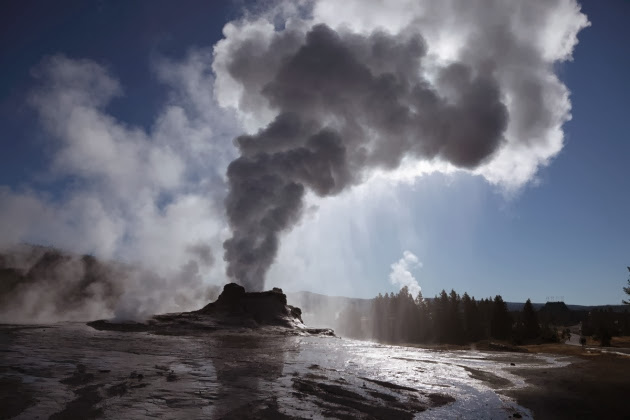 "The reservoir of molten rock underneath Yellowstone National Park in the United States is at least two and a half times larger than previously thought. Despite this, the scientists who came up with this latest estimate say that the highest risk in the iconic park is not a volcanic eruption but a huge earthquake."

It hasn't grown that much, it's only that our measuring techniques have improved and we now know much better it's full extent.  Still, some pretty cool science here.

"New pictures of this plumbing system show that the reservoir is about 80 kilometres long and 20 kilometres wide, says Robert Smith, a geophysicist at the University of Utah in Salt Lake City. “I don’t know of any other magma body that’s been imaged that’s that big,” he says."

"Jamie Farrell, a postdoctoral researcher at the University of Utah, mapped the underlying magma reservoir by analysing data from more than 4,500 earthquakes. Seismic waves travel more slowly through molten rock than through solid rock, and seismometers can detect those changes.
The images show that the reservoir resembles a 4,000-cubic-kilometre underground sponge, with 6–8% of it filled with molten rock. It underlies most of the Yellowstone caldera and extends a little beyond it to the northeast."
Posted by c w swanson at 4:17 PM