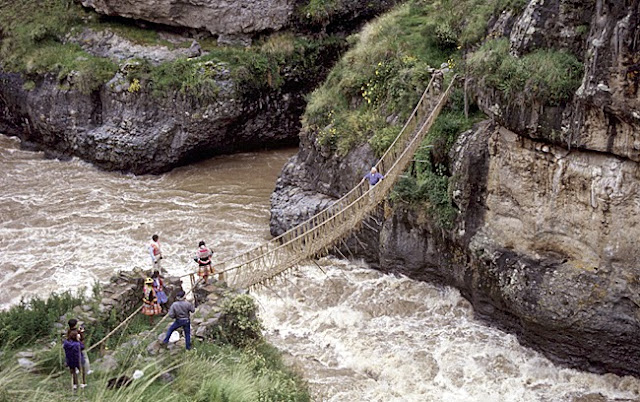 In use during the rainy season.  Reminds me of many Hollywood movie bridges that inevitably break or are cut with the hero only part way across. 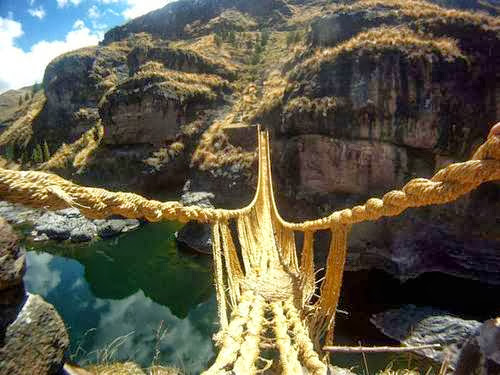 There used to be hundreds of such bridges, scattered across the former Incan Empire. By some estimates there were as many as 200 of them, braided from nothing more than twisted mountain grass and other vegetation, with cables sometimes as thick as a human torso. These lasted for centuries, but as they wore out one by one, Spanish and later Peruvian bridges slowly replaced them.Today, there is just one Incan grass bridge left, the keshwa chaca, a sagging 90-foot span that stretches between two sides of a steep gorge, near Huinchiri, Peru. According to locals, it has been there for at least 500 years. Since the Incan Empire fell 441 years ago, they can’t be that far off.

The greatest bridges of this kind were in the Apurimac Canyon along the main road north from Cuzco,[4] with a famous example being one spanning a 148 foot gap[5] that is supposed to be the inspiration behind the 1928 Pulitzer Prize winning novel "The Bridge of San Luis Rey".
The Q'eswachaka, (also spelled Qeswachaka, Keshwa Chaca or Keswachaka), spans the Apurimac River near Huinchiri, Peru, in the Province of Canas. Even though there is a modern bridge nearby, the residents of the region keep the ancient tradition and skills alive by renewing the bridge annually, in June. Several family groups have each prepared a number of grass-ropes to be formed into cables at the site, others prepare mats for decking, and the reconstruction is a communal effort. In ancient times the effort would have been a form of tax, with participants coerced to perform the rebuilding; nowadays the builders have indicated that effort is performed to honor their ancestors and the Pachamama (Earth Mother).
Posted by c w swanson at 1:46 AM