Why is that a big surprise?  He's a pot smoking community agitator from Chicago. He probably didn't know where Syria was until recently.

In contrast to this propaganda picture, where everyone but the Zero is in a jacket and looking at him for leadership, the reality was a bit different, to say the least. 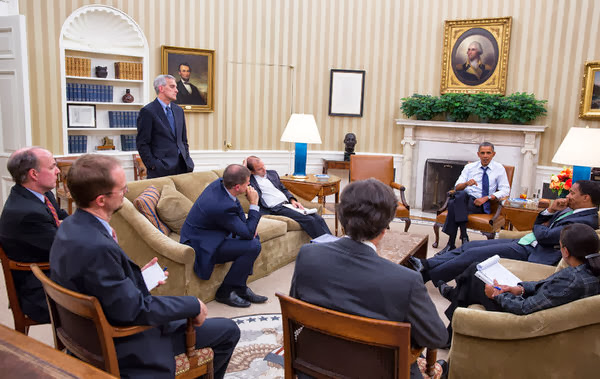 "Even as the debate about arming the rebels took on a new urgency, Mr. Obama rarely voiced strong opinions during senior staff meetings. But current and former officials said his body language was telling: he often appeared impatient or disengaged while listening to the debate, sometimes scrolling through messages on his BlackBerry or slouching and chewing gum."
Chewing gum.  Like he is in third grade.
The Propaganda Organ went on:
"But others are far more critical, saying that the administration’s paralysis left it unprepared for foreseeable events like the Aug. 21 gas attack. Decisive action by Washington, they argue, could have bolstered moderate forces battling Mr. Assad’s troops for more than two years, and helped stem the rising toll of civilian dead, blunt the influence of radical Islamist groups among the rebels and perhaps even deter the Syria government from using chemical weapons.
As one former senior White House official put it, “We spent so much damn time navel gazing, and that’s the tragedy of it.”
Whatever, this incompetence and disengagement is simply a foreshadowing of the Obamacare debacle.  I'm sure he was chewing gum and scrolling on his Blackberry as his minions were trying to plan the organization of his signature piece of legislation as well.
Let's hope no real enemy attacks us or our allies overseas, as this idiot couldn't be bothered.