Here is the youngest and oldest living Medal of Honor recipients taking a picture together. 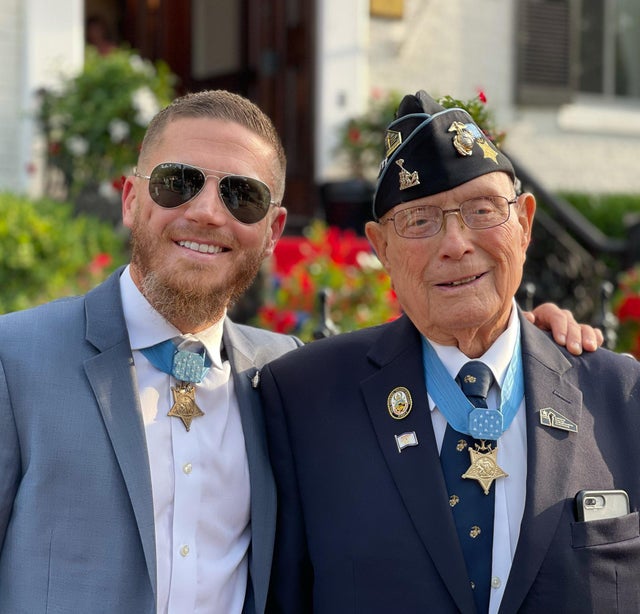 Here is Hershel Williams Medal of Honor citation signed by Harry Truman: “For conspicuous gallantry and intrepidity at the risk of his life above and beyond the call of duty as Demolition Sergeant serving with the First Battalion, Twenty-First Marines, Third Marine Division, in action against enemy Japanese forces on Iwo Jima, Volcano Island, 23 February 1945. Quick to volunteer his services when our tanks were maneuvering vainly to open a lane for the infantry through the network of reinforced concrete pillboxes, buried mines and black, volcanic sands, Corporal Williams daringly went forward alone to attempt the reduction of devastating machine-gun fire from the unyielding positions. Covered only by four riflemen, he fought desperately for four hours under terrific enemy small-arms fire and repeatedly returned to his own lines to prepare demolition charges and obtain serviced flame throwers, struggling back, frequently to the rear of hostile emplacements, to wipe out one position after another. On one occasion he daringly mounted a pillbox to insert the nozzle of his flame thrower through the air vent, kill the occupants and silence the gun; on another he grimly charged enemy riflemen who attempted to stop him with bayonets and destroyed them with a burst of flame from his weapon. His unyielding determination and extraordinary heroism in the face of ruthless enemy resistance were directly instrumental in neutralizing one of the most fanatically defended Japanese strong points encountered by his regiment and aided in enabling his company to reach its objective. Corporal Williams' aggressive fighting spirit and valiant devotion to duty throughout this fiercely contested action sustain and enhance the highest traditions of the United States Naval Service.”
***
Lance Corporal William "Kyle" Carpenter, United States Marine Corps, for conspicuous gallantry and intrepidity at the risk of his life above and beyond the call of duty while serving as an Automatic Rifleman with Company F, 2d Battalion, 9th Marines, Regimental Combat Team 1, 1st Marine Division (Forward), 1 Marine Expeditionary Force (Forward), in Helmand Province, Afghanistan in support of Operation Enduring Freedom on 21 November 2010. Lance Corporal Carpenter was a member of a platoon-sized coalition force, comprised of two reinforced Marine squads partnered with an Afghan National Army squad. The platoon had established Patrol Base Dakota two days earlier in a small village in the Marjah District in order to disrupt enemy activity and provide security for the local Afghan population. Lance Corporal Carpenter and a fellow Marine were manning a rooftop security position on the perimeter of Patrol Base Dakota when the enemy initiated a daylight attack with hand grenades, one of which landed inside their sandbagged position. Without hesitation, and with complete disregard for his own safety, Lance Corporal Carpenter moved toward the grenade in an attempt to shield his fellow Marine from the deadly blast. When the grenade detonated, his body absorbed the brunt of the blast, severely wounding him, but saving the life of his fellow Marine. By his undaunted courage, bold fighting spirit, and unwavering devotion to duty in the face of almost certain death, Lance Corporal Carpenter reflected great credit upon himself and upheld the highest traditions of the Marine Corps and the United States Naval Service.”
Posted by c w swanson at 7:34 PM