A jet breaking the sound barrier 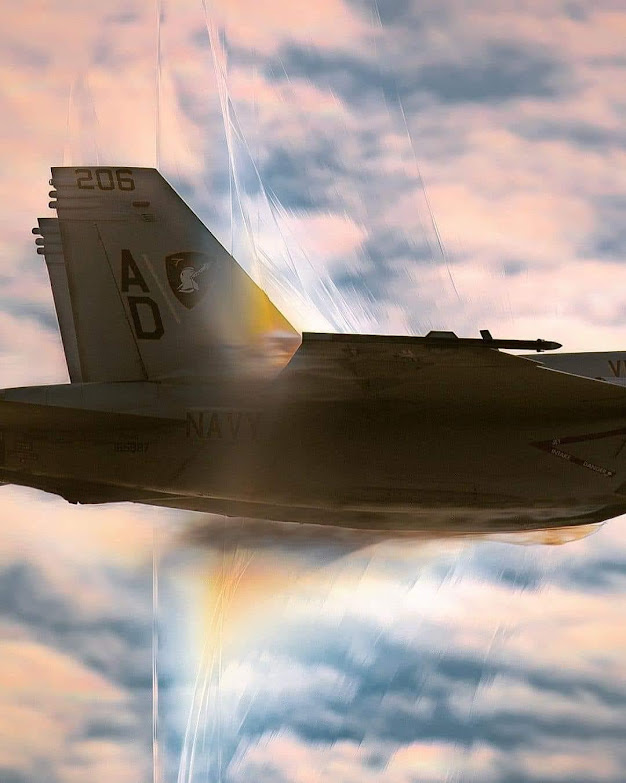 The plane creates a wave of high pressure through the air. That air is a little more dense than the surrounding air, so it acts as a lens as light travels through it, similar to the way water bends light.

You can see a similar effect in the way the air near something hot causes distortions in the image of stuff that’s beyond it, except that’s caused by lower pressure and turbulent air.

Behind that wave of high pressure is an area of low pressure, where you can see water condense briefly to form a visible cloud.

If the plane were going slower, the sound waves would be able to propagate forward and they wouldn’t be so sharply defined. Being at or near the sound barrier (speed of sound) means the waves can’t propagate faster than they’re being created and a shock cone like this one is created.

Imagine a boat traveling slowly. It’s creating a little bit of wake, but it’s moving slower than waves travel through water, so its wake isn’t very big. Small waves travel out from the boat in all directions. This is like an airplane traveling at below the speed of sound - you’d be able to hear the plane coming since sound is able to get out ahead of it.

Now the boat speeds up so that it’s going faster than waves can travel. Waves can’t travel faster than the boat anymore, so no waves go out ahead of it. Instead, the boat’s wake is much higher and it travels out in a V shape to either side of the boat and behind it. The waves crash onto the shore after the boat has passed by. This is like a supersonic plane’s sonic boom. The sound waves created by the plane traveled outward in a cone and ‘crashed’ onto your ear drums with what sounds like an explosion. No waves got ahead of the plane, so you don’t hear anything until the boom.