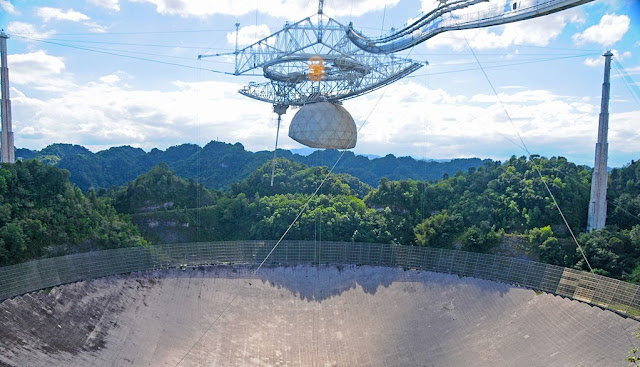 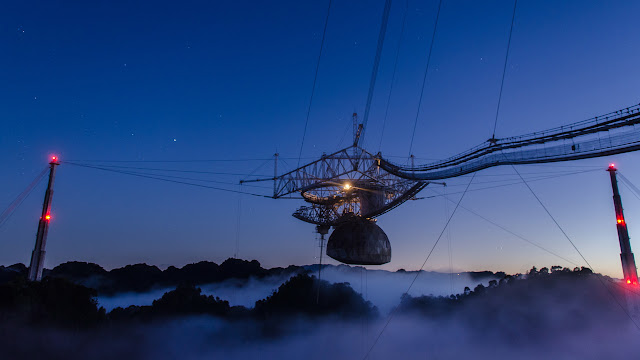 The Arecibo Observatory is a radio telescope in the municipality of Arecibo, Puerto Rico. This observatory is operated by University of Central Florida, Yang Enterprises and UMET, under cooperative agreement with the US National Science Foundation (NSF). The observatory is the sole facility of the National Astronomy and Ionosphere Center (NAIC), which is the formal name of the observatory. From its construction in the 1960s until 2011, the observatory was managed by Cornell University.
For more than 50 years, from its completion in 1963 until July 2016 when the Five hundred meter Aperture Spherical Telescope (FAST) in China was completed, the Arecibo Observatory’s 1,000-foot (305-meter) radio telescope was the world’s largest single-aperture telescope. It is used in three major areas of research: radio astronomy, atmospheric science, and radar astronomy.
Many scientific discoveries have been made with the observatory. On April 7, 1964, soon after it began operating, Gordon Pettengill’s team used it to determine that the rotation period of Mercury was not 88 days, as formerly thought, but only 59 days. In 1968, the discovery of the periodicity of the Crab Pulsar (33 milliseconds) by Lovelace and others provided the first solid evidence that neutron stars exist.