A Star Grazed Our Solar System 70,000 Years Ago, and Early Humans Likely Saw It

Early humanoid, who probably had a name like "Thag," or "Mog," wondering what the heck is up there.  Or maybe not.  Not with a group of female Neanderthals swimming down in the river! 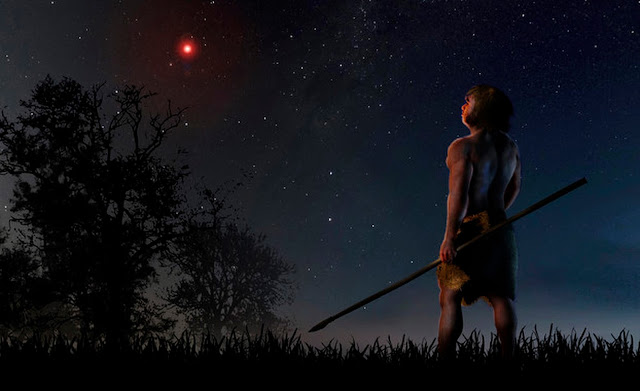 In 2015, a team of researchers announced that a red dwarf called Scholz's star apparently grazed the solar system 70,000 years ago, coming closer than 1 light-year to the sun. For perspective, the sun's nearest stellar neighbor these days, Proxima Centauri, lies about 4.2 light-years away. The astronomers came to this conclusion by measuring the motion and velocity of Scholz's star — which zooms through space with a smaller companion, a brown dwarf or "failed star" — and extrapolating backward in time.
Scholz's star passed by the solar system at a time when early humans and Neanderthals shared the Earth. The star likely appeared as a faint reddish light to anyone looking up at the time, researchers with the new study said.