Thank God serious and dedicated people are in charge now.

Let's see how the head of the Russian or Chinese military would do in such a challenge.

Sixty-one years old, and runs a sub-5 hour Boston Marathon.   Bad-ASS.   Our Chairman of the Joint Chiefs is a warrior.
I first met Joe Dunford almost 30 years ago, when he was a newly-minted Major, the Marine Officer Instructor at Holy Cross. Even to a First Lieutenant, there was something special about him, his leadership, his command presence.  General Dunford went on to do pretty well.  I next saw him as a Colonel in Iraq, serving as Chief of Staff of the 1st Marine Division, under MajGen James Mattis.  The ADC?  BGen John Kelly.   (The shirt he is wearing in the photo, "Team Kelly", is in honor of Marine 1st Lieutenant Robert Kelly, the son of General John Kelly.  1stLt Kelly was killed in Iraq Afghanistan in 2010)  General Dunford was promoted quickly through the General Officer ranks of the Marine Corps, in fact never wearing two stars, as he was selected for Lieutenant General before he'd pinned on his Major General promotion.  Of course, General Dunford went on to serve briefly as the 36th Commandant of the Marine Corps before being selected as the 19th Chairman of the Joint Chiefs of Staff. 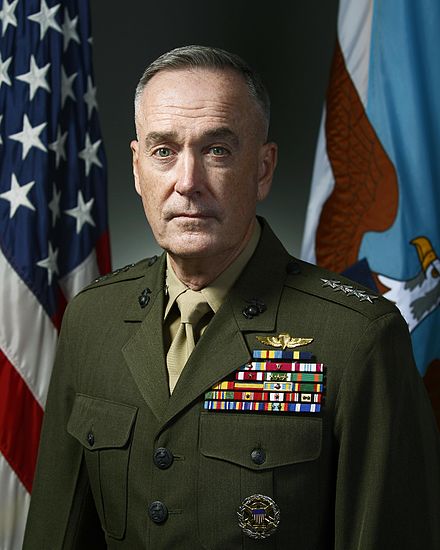 The Bad Ass himself