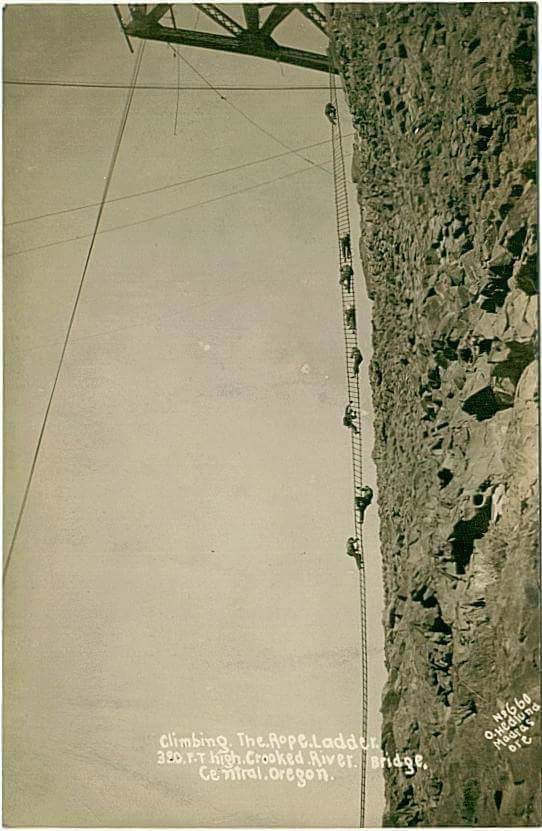 The bridge was designed by the famous bridge architect, Ralph Modjeski, who also designed the San Francisco–Oakland Bay Bridge. The Missouri Valley Bridge & Iron Company built the bridge by cantilevering it out from rock walls on both sides of the canyon.
A myth arose, fostered by a photograph of men climbing a rope ladder up to the bridge, that the bridge builders camped at the bottom of the canyon and climbed up to work every day. In fact the crew lived two miles north of the bridge in a large construction camp at Opal City.  Opal City was expected to thrive well into the future but it was completely abandoned soon after the railroad was completed.
The first steel for the bridge arrived on May 18, 1911, and was lowered by derrick to the bottom of the gorge. Men climbed down rope ladders to attach cables to the steel beams and the steel was hoisted back up both sides of the canyon as the beams were needed. The first train crossed the bridge only four months later on September 17. Half the rivets holding the bridge together were installed after trains started using the bridge. The bridge was built quickly to facilitate laying the last 25.5 miles (41.0 km) of track to Bend where Jim Hill himself drove the "golden" spike on October 5.
Dramatic photographs of the bridge's construction were taken by Olof Hedlund of Madras.