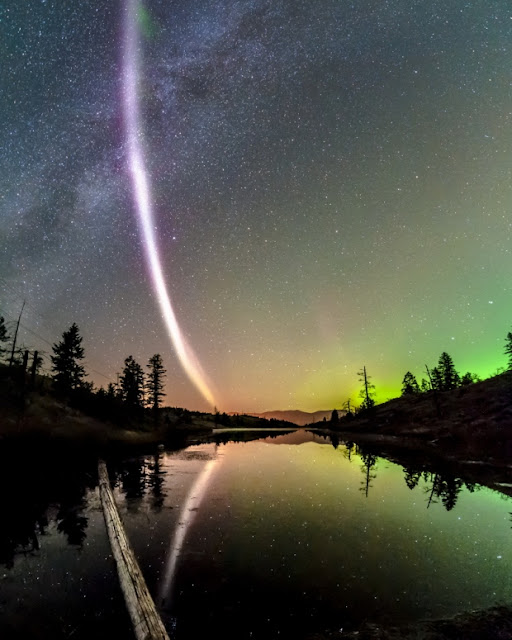 Alberta, Canada sky watchers chasing the northern lights have partnered with scientists in an effort to explain the appearance of a curious ribbon of purplish light that everyone is calling "Steve."
The feature is attracting attention for its silly name, as well as the way it was discovered, said Eric Donovan, a professor of physics and astronomy at the University of Calgary.  While photographers have been taking pictures of the phenomenon in the night sky for years, Donovan said a serendipitous drink at a pub near campus last year prompted the recent interest from scientists.
"Social media has provided a bridge between these amateur sky watchers, who are very talented photographers and very prolific finders of the aurora, and the scientific community," Donovan said.
Talk at the pub turned to a photo of what aurora chasers were calling a proton aurora. Donovan told them that was incorrect, as proton aurora are not visible to the naked eye.
"Myself and some other scientists decided we were going to try and figure out what this thing was," Donovan said.
Steve is theorized to be a ribbon of very hot and fast moving gas moving at a speed of about six kilometres per second in a westward direction.


"Now what we're doing is trying to figure out what is exactly causing this, why the gas is moving so fast, why it's so narrow, why it's so long in the east-west direction and why it's so common," Donovan said.
In any case, the odd purple color and streak like shape are beautiful.  Has anyone reading in Canada seen this "Steve?"
Posted by c w swanson at 9:40 PM