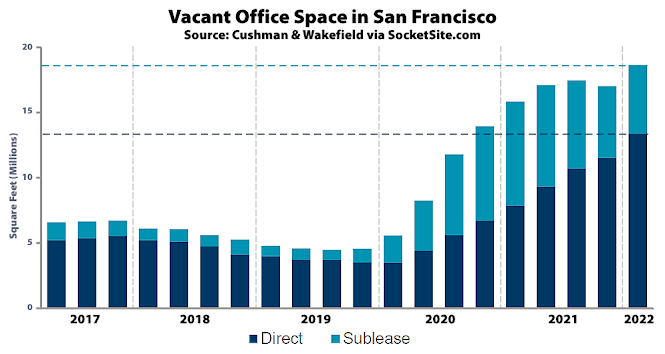 Wells Fargo announced it is giving up its space at 45 Fremont – 146K feet. In March Slack gave up all its SF space – again at 45 Fremont – 208K feet, Too, Sendoso just announced it is moving its HQ from SF to Phoeniz bringing almost a thousand jobs to the desert city. If Musk manages to take control of Twitter that company’s HQ leaves SF.

Having stupidly elected an insanely regressive government, the locals are now reaping the whirlwind that they so enthusiastically sowed.  That, combined with the realization that much work can be done remotely now, and voila!  Who needs expensive downtown office space?  Justice is served.