In the 16th century, an attack from the Ottoman Empire may have prompted panicked Hungarians to bury a stash of valuable silver and gold coins. Now, archaeologists have uncovered this buried treasure on a modern-day farm in Hungary. 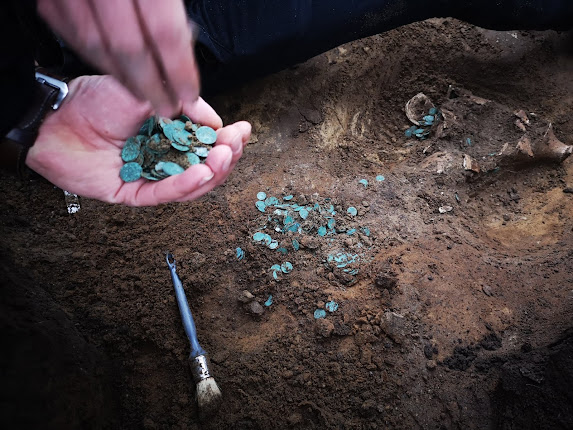 In 2019, archaeologists discovered 150 ancient coins in Újlengyel, a Hungarian village that's about 31 miles (50 kilometers) southeast of Budapest. Spurred by this discovery and equipped with metal detectors, the archaeologists returned to the site at the end of December 2020 to look for other treasures, according to a Facebook post from the Ferenczy Museum in Hungary. 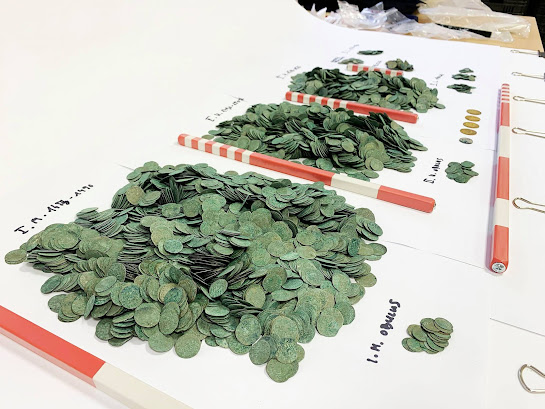 Based on the grouping of the coins close to the surface, archaeologists dug a pit three feet square. Within its confines, the team unearthed a pottery vessel in which the coins had been stashed. Its round belly had been broken by ploughing activity and the coins disturbed. Unusual in these kinds of finds, the marks of the plough in the pot and the ground were still clearly visible, so archaeologists were able to follow the movements of the displaced coins.

The pot was too broken to keep together in one piece, so the coins and pot fragments were removed and brought to the museum for cleaning and examination. Ferenczy Museum Center experts counted almost 7,000 silver coins and four gold coins in the hoard. The oldest was a silver denarius of Lucius Verus (161–169 A.D.). There were also a dozen late Imperial silver denarii struck in Aquileia mint. The coins then leap to the 15th century, with issues struck by Matthias I of Hungary (r. 1458–1490), Vladislaus II (1490–1516) and Louis II (1516-1526). One notable piece is Vatican coin struck during the papacy of Pius II (1458-1464). These are extremely rare finds in Hungary. The four gold coins date to the reign of Matthias I. They were a surprise discovery, found by museum conservators hidden behind a textile that lined the belly of the vessel.