Man, this left a big lump in my throat.

When a Sailor falls in combat at sea, tradition has it that there is a burial at sea.

If fate calls your name, I would think that a benchmark of respect has to go to how Aviation Machinist Mate 2nd Class Loyce Edward Deen, USN's Shipmates honored him. 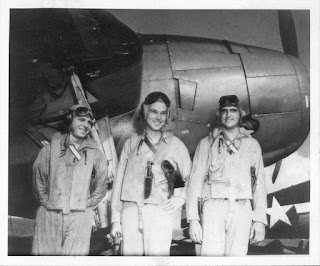 Deen is on the right.

In the clip, we see the Avenger, which was hit hard by flak, limping back to the carrier. Once it lands, the rear turret gunner's cockpit is covered up and the aircraft is ceremoniously rolled off the fantail of the ship in a unique burial at sea. You see, Aviation Machinist Mate 2nd Class Loyce Edward Deen's body was so badly mangled from the anti-aircraft shell that took his life that it couldn't be removed from the torpedo bomber's rear cockpit.

"Each day, reveille was sounded on the USS Essex's intercom at 5:30 am. Breakfast was served in the mess hall at 6:30am. Throughout the night, the planes scheduled for the next day's mission were being prepared.  On the flight deck, the Hellcat fighters were in front so they can take off first and protect the group and the carrier. In the rear were the Avenger and Hell Diver bombers and torpedo planes. After breakfast, pilots attended briefings in the 'Ready Room' to get their final orders, weather conditions and the plane that was to be assigned to them. That day, Lt. Cosgrove received tail number #93 - a new plane just acquired in Ulithi Atoll a few days ago. Lt. Cosgrove's orders were to go after the Japanese cruisers in Manila Bay.  After the briefing, Lt. Cosgrove joined his crew, Digby and Loyce, and they went topside to their plane. Loyce climbed into his gun turret for the final time. The VT-15 group took off mid-morning and it would take about two hours to get to the Manila Bay and release the ordinance.
There, they encountered heavy anti-aircraft fire from a Japanese cruiser and Loyce was killed from two AA shells. In the 2001 History Channel documentary film "Battle Group Halsey" interview, Capt. Cosgrove recalled, "Denzek told me over the intercom that Deen was hit bad. Then, Densek came back up thru the small passageway to sit in the cabin behind me. He stayed there until we landed."
During the attack, the plane and its controls were heavily damaged.  Lt. Cosgrove had his hands full and used all his strength and skill to return another un-flyable plane.  It was very sad, long and harrowing two-hour flight back to the carrier that included two thunderstorms.
Shortly after Loyce's burial, the USS Essex went into "general quarters" status for the entire evening due to the Kamikaze attacks around them. On November 6th, 12th, 13th and 14th, Lt. Cosgrove courageously got back into a new plane and attacked those same cruisers in the Bay of Manila. On November 15th, Air Group 15 disengaged from combat missions and returned to Ulithi Atoll to be replaced by Air Group 4 from the USS Bunker Hill.
Posted by c w swanson at 12:26 PM