Trees that miss the mammoth

It is said that scientists were mystified as to why antelope in North America had evolved such blazing speed, when not a single predator could come close to catching them, until they realized that it was there to allow the antelope to get away from the now extinct Cheetah.

It's the same with the odd giant fruit of trees like the Osage Orange and Honey Locust.  They evolved to attract the giants of the last ice age, the ground sloths, the mastodons and the mammoths, who would gobble their fruit and then scatter the seeds in their scat.  Even though such critters are now gone, these trees still produce the fruit they vainly hope will attract the vanished megafauna to disperse their seeds  over a wider area. 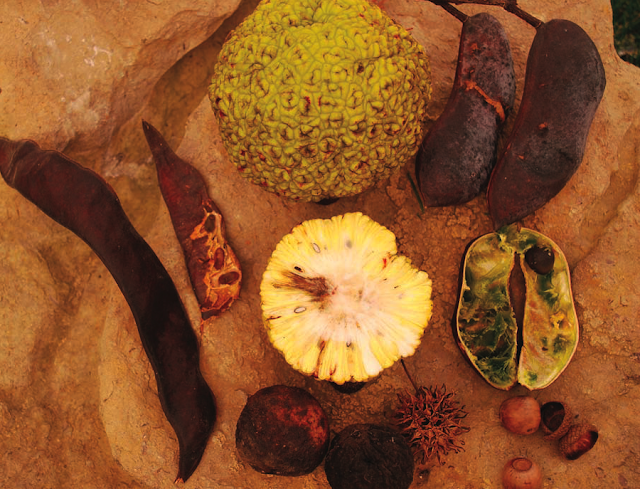 If some trees have evolved big fruits so that huge mammals would disperse their seeds, why, now that those dispersers are gone, do they waste their efforts on big fruits that rot on the ground with seeds that will never germinate? If some trees have been in an evolutionary arms race with megafaunal browsers, why not disarm and save energy now that their enemies have been eliminated?
It’s true that such adaptations are now anachronistic; they have lost their relevance. But the trees have been slow to catch on; a natural consequence of the pace of evolution. For a tree that lives, say, 250 years, 13,000 years represents only 52 generations. In an evolutionary sense, the trees don’t yet realize that the megafauna are gone.
Posted by c w swanson at 2:25 AM