So since the boy is now a Second Lieutenant in the Air Force....

I had my sister retrieve my dad's old WWII navy uniform and text me a picture.  I looked everything up, and what I found confirms what Dad told me, namely that he was a radarman, petty officer second class, in the Amphibious Forces.  He was on a troop ship that landed Marines in the Pacific Theater of WWII. 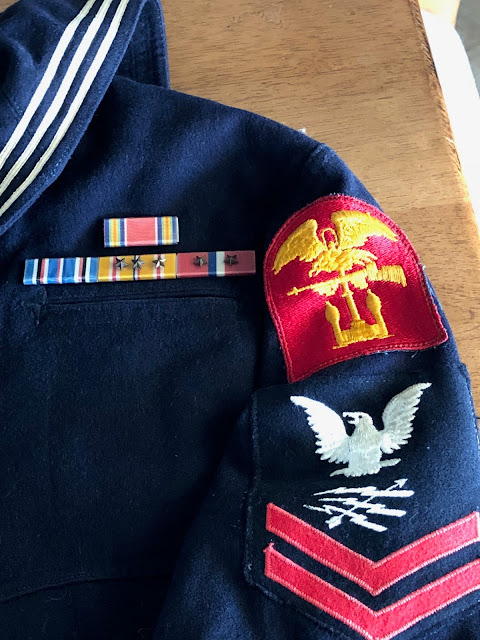 Our new LT has some big shoes to fill.

One WWII story.  Dad told me once his ship was on the way across the Pacific.  As a radarman, he was on the bridge, and he detected a signal ahead of the ship.  He informed the captain, but he was an old salt from WWI, and had no interest in newfangled gadgets like radar.  Old school.

The signal came closer and closer, and finally the old barnacle encrusted captain stationed men to watch, and it turned out the object was one of those sea mines shaped like a big ball with detonators sticking out like pins.

Emergency maneuvers were initiated, and although the mine barely missed, traveling down the side of the ship, there was concern the backwash would suck it and it would go off against the stern.  Fortunately, no boom.

Afterwards, the WWI captain had a bit more respect for what the radarman had to say.