The 2016-17 winter created one of the largest snowpacks in California’s recorded history and it’s loaded with enough water to keep reservoirs and rivers swollen for months to come.

This year’s snowpack is the seventh-deepest since 1950 and biggest since 2011, said state hydrologist Mike Anderson.

So much for the drought.  Now we will see if the state can handle the runoff without losing a dam or two.


Traditionally considered the end of California’s rain season, the April 1 snowpack is the bar by which the success of each year’s winter is measured. The state takes manual measurements the first day of each month from January to May and because April 1 falls on a Saturday this year, the Department of Water Resources measured it two days early.
As of Thursday, the snowpack across the entire Sierra was at 164% of average for this time of year. The northern region was at 147%, the central was at 175% and the southern was 164% of average, respectively, state data showed. 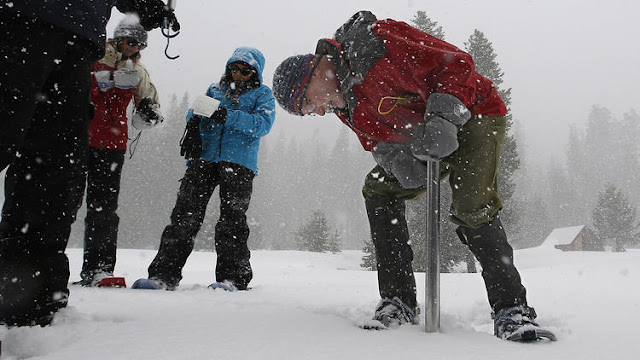 Frank Gehrke, chief of the California Cooperative Snow Surveys Program for the Department of Water Resources, checks the snowpack depth during the manual snow survey at Phillips Station, near Echo Summit, Calif. The survey found the snowpack's water content at 183% of normal for this location at this time of year.