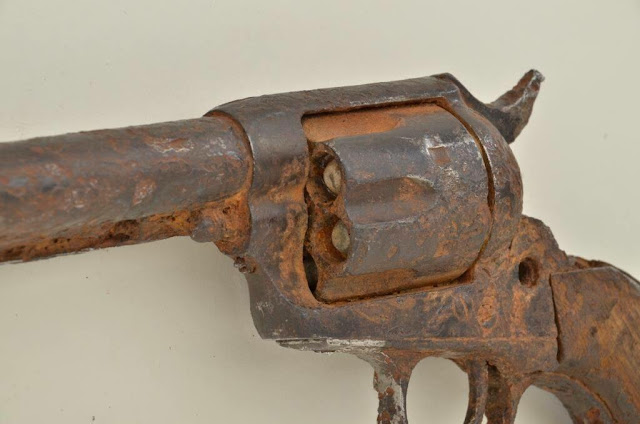 Colt Single Action Army revolver complete with grips and loaded showing period shortened barrel to 4 ¾”, serial number 60090 originally displayed in Lyons Pony Express Museum collection located in Arcadia, California. A very old handmade wood display case that has had the lid removed shows a cardboard label upon which is written in fountain pen “This badly pitted Colt Frontier revolver has killed 8 men – and once was carried by Jesse James famous killer – Jesse James while pursued by officers – while swimming his horse across the Missouri River accidentally dropped this gun in the water 20 years afterward the river changed its course & this pistol was picked up on the bank still loaded but was rusted like hell Oil it up and it will shoot, from The Pony Express Museum – Arcadia, California”. This relic single action has been known by Southern California collectors for more than 50 years and by tradition it was gifted by William Lyon to a close personal friend in the 1950s who inscribed the card and kept it till in sold to Gale Kennedy by Reata Pass Gallery near Prescott, Az.