Here's looking at you! Giant eyeball noticed on Florida beach by observant passer-by. 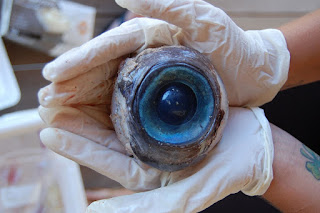 The giant creepy eyeball that washed ashore in southeastern Florida may belong to a swordfish, state wildlife officials said.
Joan Herrera of the Florida Fish and Wildlife Commission in St. Petersburg said analysts made the call based on the eye's color, size, shape and the remnants of bone on its edges, Miami's WPLG television reported.
"Based on straight-line cuts visible around the eye, we believe it was removed by a fisherman and discarded," Herrera said.
The eerie, softball-sized peeper was found by a man in Pompano Beach, north of Fort Lauderdale.