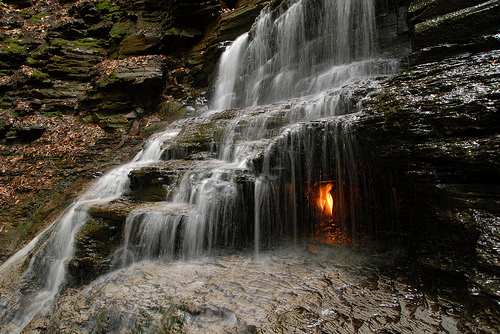 The Eternal Flame Falls is a small waterfall located in the Shale Creek Preserve, a section of Chestnut Ridge Park in Western New York. A small grotto at the waterfall’s base emits natural gas, which can be lit to produce a small flame. This flame is visible nearly year round, although it can be extinguished and must occasionally be re-lit.
Geologists from Indiana University Bloomington and Italy's National Institute of Geophysics and Volcanology studied Eternal Flame Falls in 2013 in an effort to better understand how natural gas emitted from naturally occurring hydrocarbon seeps contribute to greenhouse gases in the atmosphere. They found that the 'macro seep' at Eternal Flame Falls had higher concentrations of ethane and propane (about 35%) than other known natural gas seeps, which typically contain a greater proportion of methane.  They estimated that the seep at the falls emits approximately one kilogram (2.2 lb) of methane per day.
The researchers also noted the presence of numerous other 'micro seeps' in the area of the falls. By comparing the gas emitted by these seeps with gas from wells in the area, they determined that the gasses originate from Rhinestreet Shale approximately 400 meters (1,300 ft) below the surface. Tectonic activity likely opened faults in the shale, allowing the gas to reach the surface.