Bit coin it's not 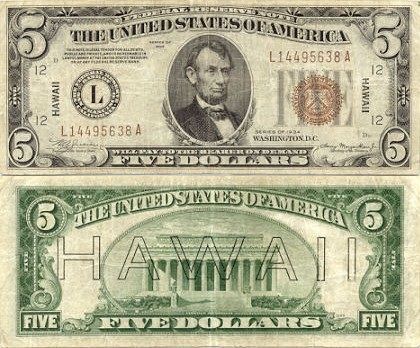 After the attack on Pearl Harbor in December 7th, 1941, it was feared that the next move of the Japanese was to invade Hawaii.  One concern of a possible Japanese invasion was the possibility that the Japanese could get there hands on millions of dollar of American currency and use it to fund their war effort.  Across the Hawaiian Islands, millions of dollars worth of hard currency was held by banks, financial institutions, businesses, and private citizens.
To solve this problem, the US Federal Reserve created an emergency “Hawaii” note to replace all currency on the islands.  The Hawaii notes were only legal tender in Hawaii and were declared worthless anywhere else.  To distinguish between real US dollars and Hawaii notes, the new notes featured a brown Federal Reserve seal and the word “Hawaii” was printed in large capital letters across the back of the bill, with the addition of two small overprints on the front.  Specially issued by the San Francisco Federal Reserve Bank, they came in denominations of $1, $5, $10, and $20.
On July 15th, 1942 citizens of Hawaii were ordered to turn in all their cash in exchange for the Hawaii notes. In total, around $200 million of cash was collected and burned.  In 1944, when it was clear that no invasion of Hawaii would occur, issuance of Hawaii notes was discontinued and normal cash was once again issued to Hawaii.  Recall of Hawaii notes began in 1946, although many bills were saved as curios and souvenirs.  Today surviving examples are popular collectors items.