When the supply convoy that Hester and her team were charged with supervising was ambushed by gunfire and grenades on the morning of March 20, 2005, the young sergeant had to think on her feet. This routine patrol turned into ground combat in a matter of seconds; 45 minutes of intense combat ensued.
The lead supply vehicle bore the brunt of the shots; it caught fire, trapping the vehicles behind it. But Hester remained unshaken, directing her team away from the enemy’s fire, and in doing so, they exposed the ditches the enemy were using as a “safe zone.”
Hester directed her team’s gunner to return fire. Shooting downrange, the gunner targeted over a dozen enemy soldiers who were concealing themselves in a nearby ditch. Then Hester herself dismounted her vehicle and threw grenades into the ditch by hand.
“It’s not like you see in the movies,” Hester explained. “They don’t, like, get shot and get blown back five feet. They just take a round, and they collapse.”
According to Military Times, Hester traversed two additional trenches on foot, killing three enemy soldiers with her M4 carbine before a ceasefire was called. The troops identified 27 deceased enemy soldiers, six injured, and one taken prisoner.
Three members of Hester’s unit had been injured in the gunfire, but all had survived.
Hester was awarded the coveted Silver Star, the third-highest decoration in the U.S. military for valor. The young sergeant was the first female in the U.S. Army to receive the award since World War II and the first female ever to receive the Silver Star for courage in combat. 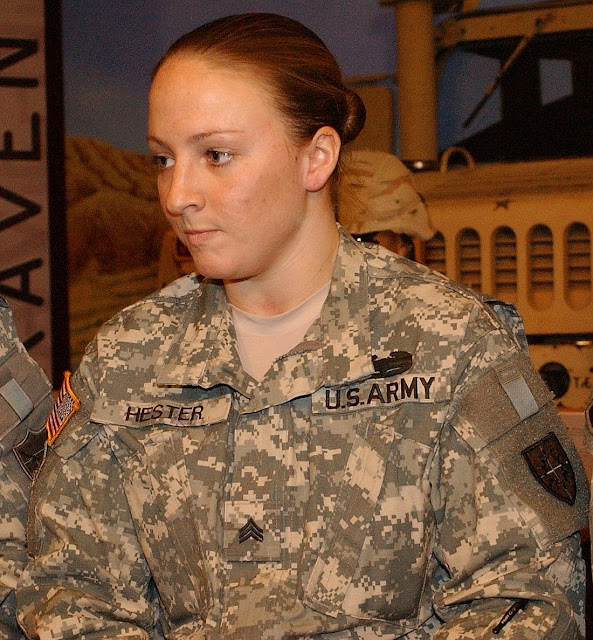