The Silicon Valley Daughter has been here all week entertaining her parents.

She works at a big, readily recognized company there, and just like on TV, the perks the employees enjoy are absurd.  She told us that:

1.  They have a waffle bar, where you go and order up the waffle combo of your choice, no charge.

2. Once a week they have been having fourth quarter "Zen Meetings" to relieve stress, during which there is food, adult beverages, games.

3. A couple weeks ago, on a Friday, there was a pie table in the lobby.  They could go and sample the pie of their choice.

4. The company has had massage tables set up in the lobby, and if you work there you can sign up for a free massage.

5. For the week before Christmas, there's been a spiced hot chocolate cart, pushed through the office by people dressed as elves, who serve up spiced hot cocoa at your desk

6. The daughter tells me she's been using Booster, a company that will find your car in the parking lot and fill it with gas for you, so you don't have to bother to go to the gas station.  They'll even wipe down your windshield for a couple extra bucks.  She says the price per gallon has been about 20 cents less than at the gas station, if you can believe that.

She says the idea is to get you to stay at the office and work for as long as possible.   She told me she's going to be "slammed" with work for the next three weeks post holidays.   Tough life in the fast lane.

While she was here we binged watched The Mandalorian.  Other than one episode, I thought it was pretty good.  Naturally, Mrs. CW and the Daughter loved the baby Yoda character and there are already a flood of memes on it.

They're funnier if you've seen the series, but this first one....looks a bit like a 1911 (a bit, now, all you pedants, not a lot), and in the series baby Yoda has a penchant for eating full sized bullfrogs that aren't much smaller than he is. 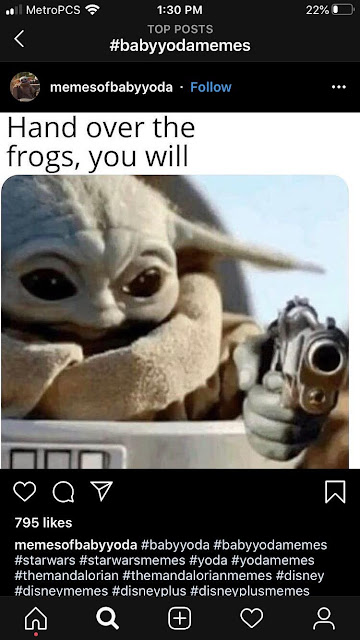 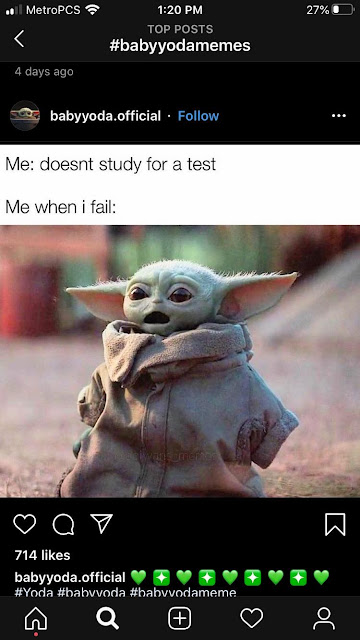