You can't be any more "on the rocks" than that 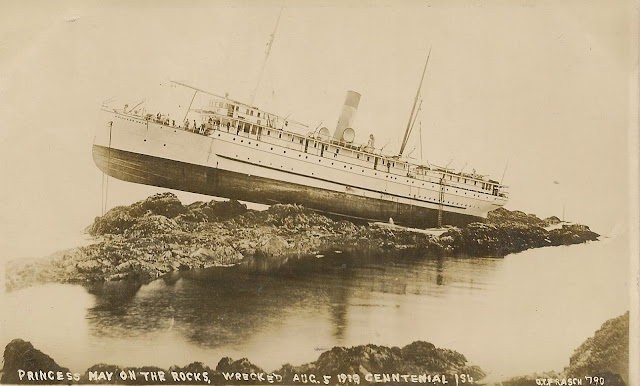 En route from Skagway, AK to Vancouver, BC on 5 August 1910, the Canadian Pacific's PRINCESS MAY, with 80 passengers and crew of 68, struck a reef almost under the eyebrows of Sentinel Island lightkeepers. The ship went on the rocks at high tide and at low water was perched high and dry. The tides in the Lynn Canal area have extreme ranges and the PRINCESS MAY picked one of the highest for her accident. All on board were easily transferred to boats and they enjoyed the hospitality of the lighthouse keepers. At a later high tide the ship was refloated.
The stranding brought to light some unsavory facts about the PRINCESS MAY's past. She was originally an English ship, built for officials of a Chinese company as the CASS and had sailed under such names at the HATING, NINGCHOW, and ARTHUR. On one voyage while she was passing through the Suez Canal, the mate manhandled one of the Chinese crewmen and, in the fight, pulled off his queue. The others rose in mutiny, the decks ran with blood, and the officers were driven to the bridge. They ran up distress signals and finally got help from the British ashore. Capt. I. Pybus and the officers were taken ashore to recuperate while the crew was subdued and replaced.

Capt. Pybus later became master of the Canadian Pacific's EMPRESS OF JAPAN. On a later occasion the CASS tried to slip away from her Shanghai moorage, was pursued, and apprehended by chinese warships. Another time she was overrun by Chinese pirates and again became the scene of more bloodshed."
Above text from This Was Seafaring by Andrews and Kirwin.