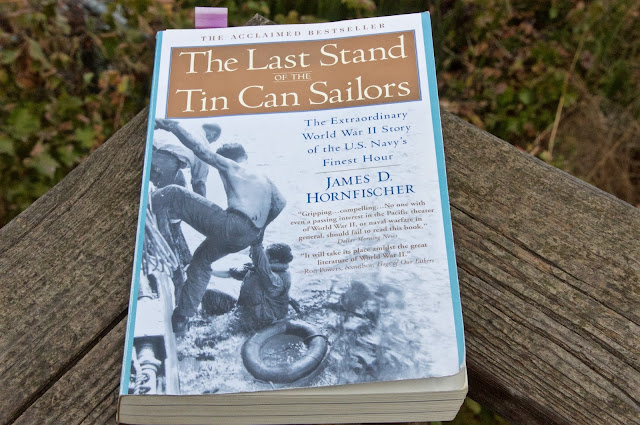 I just finished this book yesterday, and I must say after the first few chapters, it's one that's hard to put down.  One night I read until 3am, it was so riveting.
It's the story of how, during the invasion of the Philippines, the Japanese surprised the invasion force with a full on naval attack, after baiting Admiral Halsey to sail his fleet away chasing another Japanese fleet.  Out gunned in the extreme, the American destroyers, called "tin cans," charged into the teeth of the Japanese fleet, firing furiously, and ultimately contributing to turning aside the enemy.

It's an amazing read, during a time when the United States was up against a foe that was well armed, resourceful and determined.  In this case, the tin cans were up against a far better armed force, but the destroyers so impressed the Japanese with their willingness to fight to the death, that when the American survivors of one sunk can, floating in the sea, were passed by another Japanese ship, the Japanese sailors honored them by standing at attention on deck as they passed.

I was also surprised to see a post on this very battle up at Ace of Spades.

Thanks for loaning it to me, Lou, it was great!