They tried everything at least once. 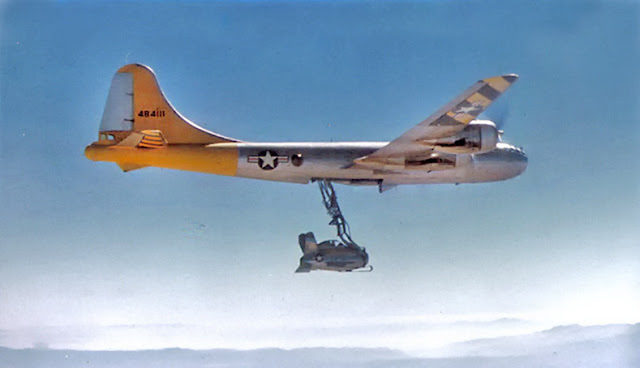 The McDonnell Aircraft Corp. XF-85 Goblin, the smallest jet-propelled fighter ever built, was a “parasite” designed to be carried by a B-36 bomber. If the host ship was attacked, the Goblin would be launched from the bomb bay to protect it. The Goblin was egg shaped and its wings — swept back 37 degrees — could fold upward. It had no landing gear and was launched from the bomber. It was then recovered using a hook and a retractable trapeze under the parent airplane. For emergencies, the Goblin had a steel skid under the fuselage and small runners on its wingtips.
It was named the Goblin because company founder James McDonnell had previously decided to name the company’s jet fighters after supernatural creatures. The Goblin followed the Phantom and the Banshee.
The tiny fighter was stable, easy to fly and recovered well from spins. However, hooking the Goblin in flight to its bomber’s trapeze was difficult. Its first fully released flight was on Aug. 23, 1948 at Muroc (now Edwards Air Force Base, Calif.). Lowered by the trapeze from the mother ship — a Boeing EB-29 nicknamed “Monstro” — McDonnell test pilot Ed Schoch released the Goblin and made three unsuccessful attempts to reconnect the X-85 to the trapeze, but the small jet was buffeted wildly by the larger jet’s turbulence. On the last attempt, the Goblin hit the trapeze with such force that the canopy was smashed. The pilot managed to make a belly landing using the Goblin’s skid on a dry lakebed.
Ultimately, only three of the seven flights of the Goblin resulted in successful connections with the arresting trapeze. The test program was canceled in 1949, and the Goblin never flew from a B-36. Docking had proved too difficult. But by that time, the Goblin was no longer needed. In 1949, the Boeing KB-29P, with its flying boom aerial refueling system, had solved the problem of long-range fighter escort for bombers.
McDonnell built two prototype Goblins, and one joined the collection at the U.S. Air Force Museum at Wright-Patterson Air Force Base, Ohio.

The designer of the Goblin, Henri de Raynbeaux - Flambeaux, on his way home from the McDonnell Aircraft Development Center. 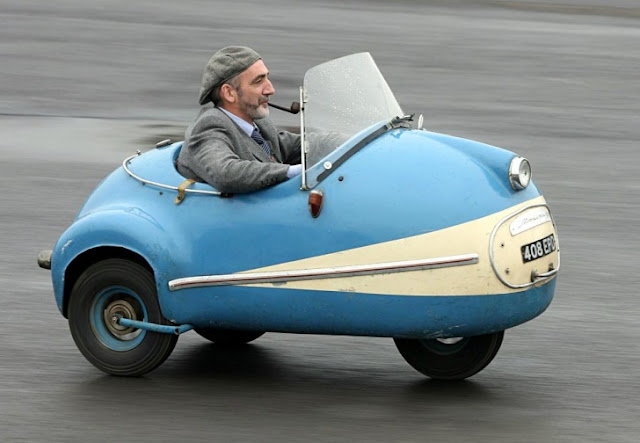