Fun with lava in Hawaii

Thermal pictures taken June 21st reveal that a hot crack spanning much of the width of the lava delta at the Kamokuna ocean entry on the big island of Hawaii. These cracks are common on lava deltas, and suggest sagging and instability at the front of the delta.  At some point in the near future, the seaward part of this new delta will tumble off into the sea and down the underwater side of the island, which is very steep off shore here.

Kilauea Volcano's Kamokuna ocean entry is fed by lava that erupts from the east flank of the Pu‘u ‘Ō‘ō cone. It travels from the vent to the ocean via a lava tube, marked in places by fume emanating from the tube roof.

Below, a view of the Kamokuna lava delta and the lave structure encasing the lava stream as it emerges from the mouth of the lava tube in the face of the sea cliff. 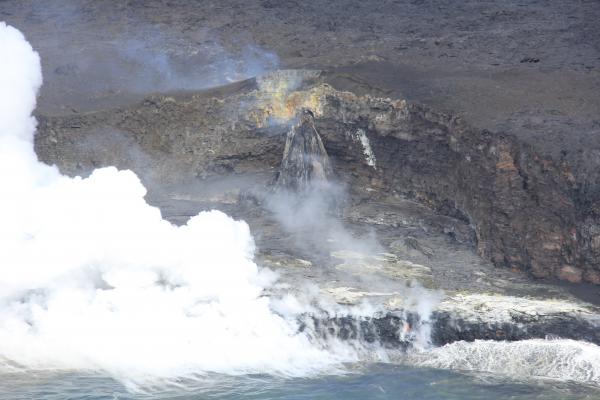 This is the same place where a few months ago a rare stream of molten lava emerged and poured out into the sea like a fire hose.  Now it is enclosed in hardened lava and building the delta seen above, which periodically gets too top heavy and breaks off into the Pacific.