Much to Hillary's annoyance, I'm sure, this picture of unrepentant alley cat and former prez, Bill Clinton, and the busty butterface blonde is bouncing all over the internet.

One wonders if Bill is doing this on purpose, to ruin Hillary's campaign in a passive aggressive fashion by creating publicity that reminds the voters of all the bad stuff that happened during his terms in the White House.  I guess he's moved on from blue dresses to red these days. 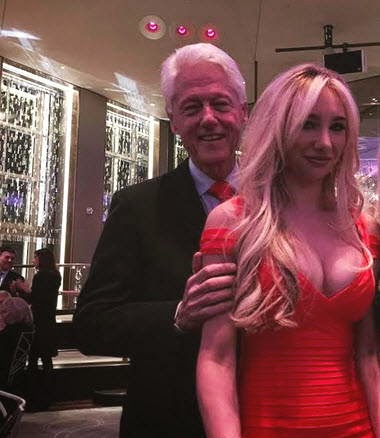 Now it turns out that the Butterface is actually the spawn of some billionaire grocer, and a political hanger on to boot.

Andrea Catsimatidis, daughter of billionaire grocer and failed mayoral candidate John Catsimatidis, filed for divorce Wednesday against her husband of three years, President Richard Nixon’s grandson Christopher Nixon Cox.
The couple, who met while Cox was working for John McCain’s presidential campaign, celebrated their nuptials before powerhouse politicos including Hillary Clinton and Henry Kissinger at a lavish Waldorf Astoria reception in June 2011.
Living a settled, normal existence is just so impossible for this type of chick. I'm surprised they lasted as long as three years.
I'm sure no one will get the dry heaves from this picture that Gerard somehow found of the oily Bill Clinton handling the poor girl in her early teenaged years.  Strangely, she seems to have the same expression on her face in both pictures.
I simply do not get why Bill, who to me seems so transparently a scammer, a facile liar, and a snake oil salesman par excellence, is still so popular with those who ought to know better.
I'm sure we will find out more in the days to come. 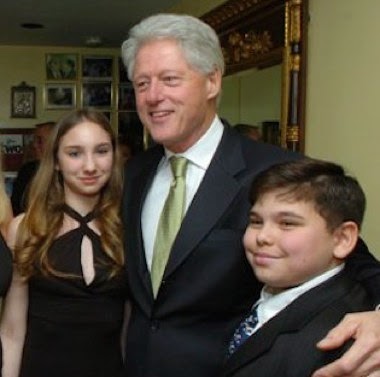