Sitting on a wall of water 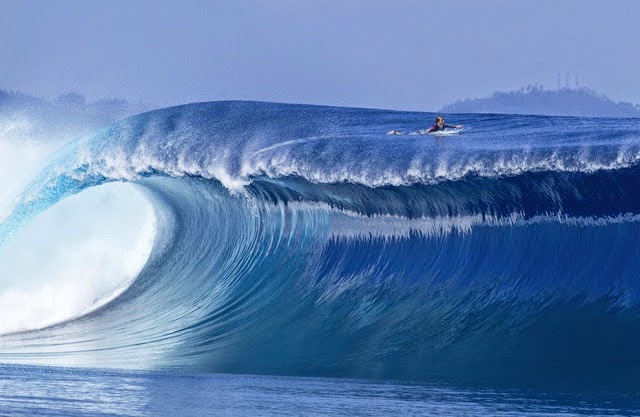 From the Atlantic Magazine's Red Bull photo contest of 2013.

Stuart Gibson's photo of Sean Woolnough on a wave in Namotu Island, Fiji, was a finalist in the Spirit category. "Sean Woolnough and I were in Fiji for big swell and the wind went dead, so while we still had amazing conditions, we jumped in a Fijian long boat. This is more of a tow wave, as you can see --- paddling this wave doesn't end well. The island jetski was out of action so we thought we'd give it a go. I dropped Sean at the top of the reef, and the ocean went flat, like someone had turned off the tap. It takes a big set to light this slab up, and as Sean sat patiently I saw a big lump coming. I started yelling, but he had no reference as to where he was on the reef so he waited and paddled for this first wave of the set. He just missed it, and when I looked back, this deep blue lump just started draining out, almost sucking him under the wave. He took one big duckdive and got under the breaking lip. On a normal wave this is fine but this thing didn't have a back -- the reef drops to 200m out the back of this place so when it breaks it really folds. The wave had just too much power and sucked him back over the falls, it's pretty much a surfer's worst nightmare position, so many people claim this is photoshopped, but it certainly is not!"