Scholars have identified a stele in the possession of a Norwegian collector as showing the only known depiction of what is probably the biblical Tower of Babel, along with it's floor plan.  It also has the best picture of the actual King Nebuchadnezzar, who finished building the tower and made it famous. There are only two other pictures of Old Neb,  carved into a mountain in what is today's Lebanon, but the elements have not been kind over the centuries. 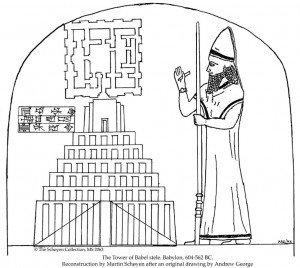 According to historians, Nebuchadnezzar finished the tower in the late 500 BC, but it had been started by an earlier king, in the 1700's BC.  It was dedicated to their god, Marduk.

As written on the stele, the King stated that  "“I mobilized (all) countries everywhere, (each and) every ruler (who) had been raised to prominence over all the people of the world (as one) loved by Marduk…” he wrote on the stele"


All those people working in the same place, it must have been a real "babel" of languages!


Anyway, historians tell us that when Cyrus the Great took Babylon in 538 BC, he pulled down the stairs leading into the tower to prevent it from becoming a fortress.  Later, in 331 BC when the Macedonian Alexander the Great came around, water damage caused by the removal of the stairs had made the tower dangerously unstable, so he ordered it torn down and rebuilt.  Well, it was torn down, but when he died unexpectedly, it was never rebuilt.

However, even today the foundation for the tower can still be seen from space!  So, about 3700 years after it was first conceived and begun, it's mark is still there on the land.
Posted by c w swanson at 11:24 AM